Sometimes Home-front and Sweetheart Pieces Are the Best Items Available 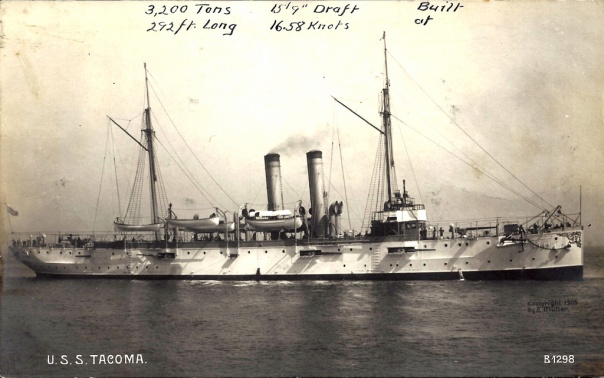 The USS Tacoma (C-18) taken shortly after her commissioning. The photo (an RPPC) is part of the author’s archive,

As much as I enjoy the brief naval warship histories that are available online, where they are lacking is often the area where my research needs them to be more complete, especially when there are artifacts that require deeper investigation. One of the ships that I am constantly on the watch for associated or connected artifacts was an early Twentieth Century protected cruiser. The USS Tacoma (C-18) was the fifth vessel of the six-ship Denver Class cruisers (hull numbers C-14 through C-19) that were placed into commission in a fourteen-month span between November 1903 to February of 1905. Oddly enough, the Tacoma was commissioned second (chronologically) behind USS Cleveland (C-19) which was the first to be placed into active service.

Artifacts from the USS Tacoma are very scarce. Apart from the occasional press photograph, few pieces become available on the collector market. Unlike other more famous warships of this era (such as the USS Maine), the Tacoma is a relatively unknown ship. Another contributing factor to the lack of USS Tacoma material could be its brief service life and untimely and sorrowful demise.

For many reasons, I have taken a concerted interest and have been on the hunt for just about anything that is even remotely contextual. In the last decade, I have been able to acquire memorabilia (rather than militaria artifacts directly obtained from the USS Tacoma or veterans who served aboard her) that is more along the lines of homefront or sweetheart pieces such as this ornate silver spoon.

This portrait (printed as a real photo postcard or RPPC) was taken between 1904 and 1913 and shows two sailors. Note the flat hat tally of the seated sailor which denotes the ship he is assigned to (the cruiser USS Tacoma).

In the last several months, I have been able to secure two pieces that fit into these categories. The first, a vintage real photo postcard (RPPC) portrait of two sailors in their dress blue uniforms. The apprentice seaman that is seated is wearing a flat hat complete with the tally around the hatband that denotes the name of the ship. The sailor standing next to him is also wearing his flat hat but, being the more salty and experienced sailor, he has customized his to be more relaxed in its appearance by removing the stiffener. With the top having a slouched appearance, the ship’s tally is concealed.

Dating this photo to a specific year is somewhat difficult however it is rather easy to narrow down the range of years by using the visible clues on the subjects, themselves. The USS Tacoma served for just under 20 years (commissioned on January 30, 1904 until she broke apart having run aground on Blanquilla Reef near Vera Cruz, Mexico on January 16, 1924) which is a broad range of time. Fortunately, enlisted uniforms underwent some significant regulations changes during that period of time.

Noting the standing sailor’s rank insignia (his badge which indicates his job specialty known in the Navy as a “rating”), there are a few elements surrounding the design of the badge and the location that, when compared with various changes to these specific areas, the era from which this photo originates is determined to be within the first decade of the ship’s service. This particular second class petty officer is a machinist’s mate which is part of the engine room force. Prior to the uniform regulations of 1913, ship’s crews were divided into two watch-standing sections (when one section is on duty, the other is either sleeping or performing daily shipboard tasks) that were known as “port” and “starboard” sections. The petty officers in those sections would wear their rating badge on the corresponding sleeve (left sleeve for port, right for starboard). With the regulations changes, the watch-standing correlation was abolished and all non-seaman branch ratings were moved to the left sleeve.

A deeper analysis of the sailor’s uniforms raises some questions regarding visible anomalies. The cuff piping on the MM2/c’s jumper top is clearly visible (the three stripes represent all three of the lower grades of non-rated seaman that he progressed through) and yet his collar and flap are blank similar to that of an un-dress jumper which should not have piping on the collar flap (and would have cuff-less sleeves).

Another interesting uniform configuration lies with the dress of the seated apprentice seaman’s under shirt – a blue knit sweater with a drawstring tied into a bow at the neckline. After pouring through the uniform regulations, I was unable to determine any stipulations governing such a configuration. Sailors were adept at customizing their uniforms to suit their personalities and level of personal comfort due to the more permissive standards of the era. With present-day regulations, uniformity and appearance is more controlled and restrictive and would negate such customized approaches.

The photograph itself wouldn’t garner much collector attention as it is merely a portrait of two unnamed sailors. To a collector of USS Tacoma memorabilia, the RPPC is golden. Perhaps a bit more interesting for some specialized collectors are home-front or sweetheart pieces (items made or purchased as remembrances of a loved one who is away from home, serving in the armed forces). Decorative and commemorative pillow covers were commonly purchased by service members for their mothers or sweethearts with the idea that a a reminder of the veteran is close at hand (kept on their bed or adorning the couch). These pieces were manufactured by vendors and sold on or near military bases and were quite common from the 1930s through the 1950s. Though commemorative pillow covers were made in the early parts of the Twentieth Century, they weren’t as prevalent.

This pre-WWI silk pillow cover is quite unique. The flags shown within the design seem to indicate its age.

When this cover was listed, it stood out and immediately drew my attention due to the brilliant colors and design along with the flags of the world. Immediately, I recognized the depiction of the ship and was astonished by the unique size and the patriotic imagery. Dating the piece is a bit of a challenge though it can certainly be narrowed down based upon the the details with what is depicted. Due to the warranted animosity towards the antagonists of the Great War, it is highly doubtful that anyone would market something that contained the flags of these aggressors.

The upper left panel of the USS Tacoma (C-18) silk pillow cover. Pay particular attention to the flags of Canada and New Zealand (Flag of the United Tribes of New Zealand)

The upper right panel of the USS Tacoma (C-18) silk pillow cover. The presence of the old German national flag would indicate a pre-1914 date of manufacturing for this pillow cover.

It could be folly to rely solely upon the flag illustrations as the credible source for dating the pillow cover. Considering that available reference resources were not as current or contained current variations to draw upon. Also, the imagery is employed as a decorative element rather than to be an authoritative source for flags of the world.

The silk screen printing is crisp as is visible in the small image of a sailor posed in rigging.

The top half of the center panel of the USS Tacoma (C-18) silk pillow cover.

Showing the image of the ship in the center panel of the USS Tacoma (C-18) silk pillow cover.

Independent of assessing the age of the USS Tacoma pillow cover, the piece itself is near-flawless and shows no signs of wear, age or fading. It is clear that the artifact has been stored away from ultraviolet light and protected from oxidation for nearly a century.

Though not as ornately designed as the obverse, the back panel of the USS Tacoma (C-18) pillow cover resembles the naval Union Jack with the blue field and 49 stars.