A Cut Above: Sculpting Leadership Excellence; The Draper and Goodrich Cavalry and Armor Awards

In the process of investigating, researching and collecting militaria, one will undoubtedly uncover compelling narratives and personal stories surrounding artifacts. In addition to the tangible and tactile qualities and traits that accompany each piece, for many collectors, it is the connection to historical events or personalities that transforms an otherwise ordinary object into something that is utterly priceless. The Veteran’s Collection has been a vehicle used to educate fellow collectors and military history enthusiasts (predominantly) through individual militaria artifacts that reside within our collection.

Of the many roads this author traveled in becoming a collector of militaria, one in particular was focused specifically on genealogical and ancestry research centered upon those who served in the armed forces. Besides the military-specific discoveries associated with individuals in this author’s lineage, other interesting discoveries were made within one maternal great-grandfathers’ branch of the family tree. Seeking connections to historical, famous or infamous personalities is a common practice among amateur and familial genealogists, and some folks are only able to unearth such finds eight or more generations up their tree. For my family tree, one such discovery was four generations removed from me.

Though family genealogical research has revealed a handful of noteworthy ancestors, the pertinent individual (to this article) was an artist, sometimes referred to as the “Sculptor in Buckskin,” a name which Alexander Phimister Proctor entitled his 1971 autobiography. Canadian-born Proctor’s grandfather (who is also one of my third great-grandfathers – I have 16 of them) emigrated to the greater London, Ontario, area from Scotland, having served in the area years prior in the 42nd (Royal Highland) Regiment of Foot, known as the Highland Black Watch. When the artist was young, his family moved to Iowa in the months following the end of the Civil War before ultimately settling in the Denver, Colorado, area where Proctor would experience life on the American Frontier. A prolific sculptor throughout his life, A. Phimister Proctor studied in New York and Paris and collaborated with Augustus Saint Gaudens. Proctor’s body of work was influenced by the Western Frontier and pioneers, along with legendary American figures including those from the Civil War.

Rather than to elicit incessant yawns or to encourage readers to click away to more compelling content, abstaining from committing significant line-space to my personal genealogy seems to be the better course for this article.  My cousin (first cousin, three times removed) does have a more specific connection to the overarching subject at hand: militaria adding further delight to the discovery of the familial connection.

One of Proctor’s countless spectacular commissioned pieces was the result of a 1926 conversation between the (then) Chief of the Cavalry, Major General Malin Craig, and one of his officers, Major L.E. Goodrich of the Cavalry Reserve in Miami, Florida.

Major Goodrich was seeking to improve troopers’ participation in cavalry exercises by incorporating competition along with an incentive of an award for the unit that achieves the highest performance rating in the training. General Craig commissioned his friend, A. Phimister Proctor with $2,000 to sculpt a trophy (an amount that was far below Proctor’s typical fee for an individual commission) sourced from funds donated by Goodrich. Following the creation of the Goodrich Trophy in 1926, the first unit recipient was Troop G of the Second Cavalry (Fort Riley, Kansas, then the home of the U.S. Cavalry school). In the years that followed, the Goodrich Trophy would be awarded to the cavalry troop that excelled in general cavalry proficiency (mobility, fire power and shock action).

“Major Goodrich originally donated $50,000 to sponsor a mounted service ride. However, the final outcome was the bronze equestrian statue pictured. A. Phimister Proctor, one of America’s leading sculptors, was commissioned to design and sculpt the Goodrich Riding Trophy. Proctor, whose specialty was sculpting animals, especially horses, produced the masterpiece of a cavalry trooper astride a horse in full gallop, attacking with a drawn pistol. Proctor used a Sergeant Wotiski and his mount “Peggy” as models during the completion of the sculpture.” – Have You Seen Me?, Sergeant Major Timothy E. Maples, 1997

Proctor’s sculpture featured a cavalry trooper mounted atop a horse depicted in full gallop. The trooper, gripping the horse’s reins with his left hand, has his M1911 .45 caliber pistol drawn and leveled upon an unseen target.  The bronze sculpture, titled “U.S. Cavalryman,” is mounted to a white marble pedestal with “Goodrich Riding Trophy” engraved into both sides.

Reproduction of Alexander Phimister Proctor’s (American, 1860-1950) “Goodrich Riding Trophy”-1926, bronze. A 1977 casting after Alexander Phimister Proctor’s (American, 1860-1950) original 1926 casting depicting a cavalryman on horseback with pistol aimed to fire, on marble plinth base, with inscription “Goodrich Riding Trophy”, signed to back “A. Phimister Proctor”. This casting was produced by the Draper Combat Leadership Trust in an edition of 46. Overall (with base) approximately 20.75″ x 26″ x 8″; (without base) 17.5″ x 20.75″ x 7.75″ This example was auctioned for $600 (image source: Ahlers and Ogletree Auctions).

Ahead of the establishment of the Goodrich Riding Trophy, Lieutenant Colonel Wickliffe P. Draper sought to institute competition in testing the leadership among small cavalry units. The resulting Cavalry Leadership Test for Small Units was established in 1924 by Draper. In 1928, LTC Draper established a trust fund of $35,000 to perpetuate the award which by then incorporated a platoon-sized competition held at multiple installations throughout the United States including Fort Clark, Texas; Fort Myer, Virginia; Fort Ethan Allen, Vermont; and Fort Knox, Kentucky, adding in mechanized cavalry units as eligible participants.

In the mid-1950s, the award was renamed as the Armor Leadership Award along with a new regulation (within AR 672-73) stipulating that tests would be held to determine the best platoon in a designated armored division.  Additional changes to the competition included providing authorization to the Commander of each armored and infantry division, armored cavalry regiment, separate armor brigade (including mechanized brigade), and armor group of the active Army, Army National Guard, and the United States Army Reserve to annually select the outstanding tank or cavalry unit, including attack helicopter and air cavalry units, under his command.

In the early 1970s, following years of diminishing interest in the Armor Leadership award, the Assistant Commandant of the Armor School distributed reminders abut the upcoming annual competition which prompted David K. Doyle (then, Colonel and Commander of the Third Armored Cavalry Regiment) months later to write a letter in response to the reminder suggesting that the Goodrich Trophy Competition be revived and that the Goodrich Competition be held for cavalry units and the Draper Competition be held for tank units. 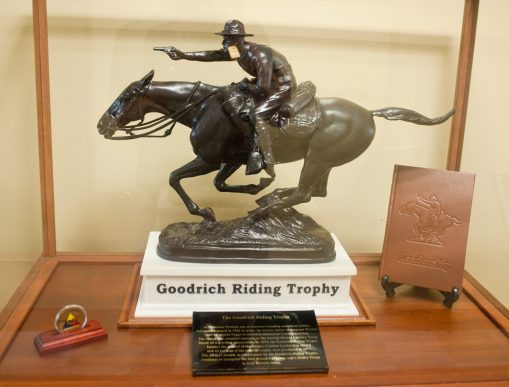 The Goodrich Riding Trophy along with the Draper Award coin and book at Fort Benning, Georgia (Photo by John D. Helms – john.d.helms@us.army.mil).

Further revisions to the award program include provisions for the perpetual reproduction of the Goodrich Riding Trophy as replicas, and are now readily available for Army-wide distribution to the Commander of each armored and infantry division, armored cavalry regiment, separate armored brigade (including mechanized brigade), and armored group of the Active Army, Army National Guard and Army Reserve, and are funded by the Draper Leader Trust Fund.  The current trophy includes an option for a secondary base that provides for up to ten unit inscriptions (for subsequent awards).

Awarded upon completion of the Armor Pre-Command course at Fort Knox, this coin is only one element of what is given to recipients. The obverse is adorned with the image of A. Phimister Proctor’s U.S. Cavalryman sculpture and the reverse features the U.S. Armor insignia in the center flanked by the cavalry and armor collar device insignia. A place for the the serial number of the recipients’ specific award is provided (this one has been altered for security purposes) beneath the central image (image source: Todd Mayer, Col. U.S.A., Ret.).

With the Goodrich Riding Trophy being presented to and residing within each recipient unit, the Draper Armor Leadership Award is presented to individuals in the form of a serialized challenge coin and a leather-bound presentation edition of the Cavalry and Armor Heritage Series book (Volume I | Leadership). Both the challenge coin and the book’s cover feature the image of the U.S. Cavalryman as it was derived from A. Phimister Proctor’s 1926 sculpture. 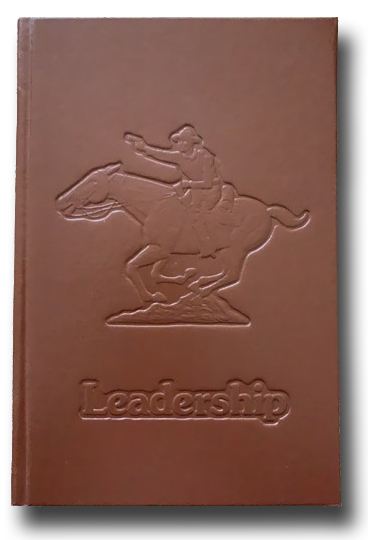 In addition to the coin, the Draper award recipients are gifted with the “Cavalry and Armor: Heritage Series, Leadership | Volume I” leather-bound book. The cover features and embossed image of the U.S. Cavalryman sculpture created by A. Phimister Proctor (image source: Todd Mayer, Col. U.S.A., Ret.).

When the Draper Armor Leadership Award is presented, I wonder if the recipient troops and troopers see the U.S. Cavalryman image as anything more than a simple, symbolic representation. Upon my discovery of my cousin’s connection with the award, I instinctively reached out to one of my friends, a retired Army colonel (who served in the armored branch) to determine if he was a Draper Armor and Cavalry Leadership Award recipient.  My friend, Todd Mayer (Colonel, U.S. Army, Retired) confirmed my suspicions that, “(the award) was an automatic if you were selected to command a battalion or a squadron which was a lieutenant colonel command,” Mayer replied. “I was a Major when I received this book (part of the award) at Fort Knox. Just after that I was promoted to lieutenant colonel and commanded 2-107th Cavalry.” Todd Mayer mentioned that his Draper Award was given in conjunction with his successful completion of the Armor Pre-Command Course.

Though I served in the Navy, I rather enjoy this minuscule connection with the award through my cousin’s artistic achievement. An additional connection that brings me a measure of delight stems from another of my ancestors’ cavalry association (that I have previously shared on the Veterans Collection) with his service in the 6th Pennsylvania Cavalry (Rush’s Lancers) during the Civil War. 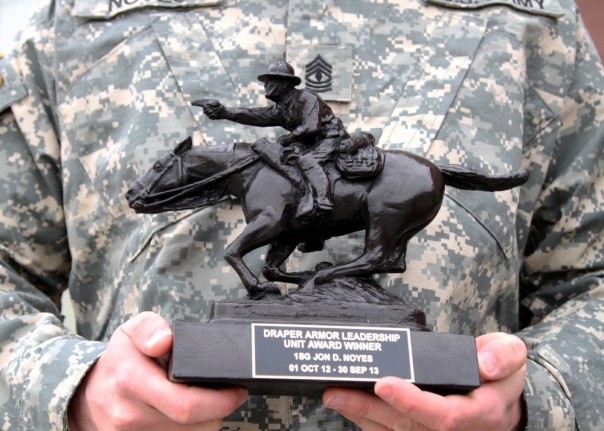 Bearing a personalized plate for 1SG Jon D. Noyes, this U.S. Cavalryman statue, sculpted by A. Phimister Proctor, is now being used as part of the Draper Armor Leadership Unit Award rather than as the Goodrich Riding Trophy. This re-cast of the original trophy lacks the detail of the one cast in 1926 and the re-cast sculptures of the 1970s and appears to no longer bear the artist’s signature in the casting (image source: DVIDS/U.S. Army).

The militaria collector and genealogist in me fuels my interest in possessing any of these pieces within my collection. However, due to the controlled nature and prestigious nature surrounding the Goodrich/Draper Trophy along with the challenge coin, it is doubtful that any of them will ever legally become available on the militaria market as these pieces should remain with their rightful owners.