Are the Best Sources of Militaria Online?

Almost to a fault, I am an online shopper, especially when I shop for birthday and Christmas gifts. I compare prices and seek out the best deals (inclusive of shipping costs) and try to find the best blend of economy, availability and convenience before I commit to a purchase. If I can avoid visiting a store in person and still find a bargain, I am satisfied. However, there are still merchants that I do enjoy patronizing (my local bike shop, for one) in person.

An overwhelmingly large percentage of my articles here and on my baseball militaria site cover my acquired artifacts that were predominantly sourced via online auctions. Seeking the militaria pieces that I am interested in outside of auctions can be a fruitless task for a person who doesn’t have the patience for garage, yard and estate sales. There are a few military surplus stores in my region as well as a local militaria business (that is seemingly never open) but they typically sell and buy modern items. What other sources are there?

Several years ago when I was becoming active in militaria collecting, I was invited to tag along with some veteran-friends (they are all Vietnam vets) to drive a few hours to a military antiques show held at the Jackson Armory in Portland, Oregon. I was overwhelmed by the number of tables that were filled with artifacts from present-day and back to the Civil War. Not only were there American items but also pieces from other nations’ armed forces, captivating my attention for hours as I walked (and re-walked) each row. I arrived at the show without a single objective – I had nothing targeted as I didn’t know what to expect and as a result, left empty-handed.  However, I did leave the show with a new understanding of the possibilities for locating pieces if other sources are do not yield results.

At this year’s show, there were considerably fewer tables of militaria for sale which coincided with the show’s small attendance.

As with other collectible shows (antiques, sports memorabilia, vintage toys, etc.), these gatherings are dominated by collectors and experts who are seeking to buy, sell and trade their pieces and since they are (mostly) private sellers, they don’t have the operating costs that brick-and-mortar business have to cover with their transactions. Items sold by individuals are generally less-expensive as they lack mark-up pricing. 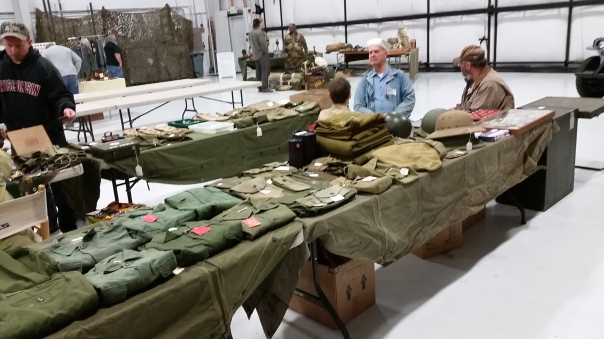 With so few customers to engage with, vendors socialized among themselves. Though the show was smaller than previous years, there was plenty for me see.

This beautiful CAC uniform (along with the cap from the same period) immediately caught my attention.

Aside from seeking specific items for my collection, I have since discovered that I enjoy attending militaria collectors shows just to be able to converse in person with other collectors and people who are passionate about preserving history. This was the case last month when I made plans to attend a local, semi-annual show, hosted at the Olympic Flight Museum in Olympia, WA. Considering that most of what I am presently seeking (military baseball artifacts) is seldom seen within militaria collections, I had no expectations heading into this show. The last time I attended, my son (a budding military history buff and part-time collector) accompanied me but he has since left the nest and embarked upon his own military career. Desiring to spend more time with my best-friend and wife, I asked her if she would join me. I should mention that I am blessed to be married to someone who shares my passion for history and encourages me with my interests (and sometimes assists with the editing of my writing when she is available).

This display of vintage photographs of local CAC forts was fantastic.

Each one of these Riker cases displayed vintage artifacts from specific local CAC forts.

Though this cap was not worn by the original owner of the displayed jacket, it is the correct head covering for this type of CAC uniform.

The large brass crossed cannons devices are spectacular against the blue wool and artilleryman red trim.

It has been nearly four years since my last visit and upon entering (this year), my initial observation, compared to what I saw in 2014, I noticed that there were about half the number of tables. After a few hours of carefully viewing what was for sale along with a fantastic display of a Coast Artillery Corps (CAC) collection (artifacts from now-defunct local coastal forts), I purchased a few small pieces to add to my collection of WWII naval officers metal collar and cap insignia and headed out to take my wife to my favorite local Mexican restaurant for lunch.

I noticed that there was greater volume of foreign militaria at this year’s show. A large portion of it consisted of early 20th Century German and Third Reich items.

Unless one is experienced and highly knowledgeable on Third Reich militaria, my advice is to stay away from these pieces as they are highly reproduced and expertly-faked pieces. That is not to suggest that anything at this dealer’s table was less than authentic.

Though I have Third Reich pieces in my collection (my uncle sent them home as war souvenirs), I do not collect this sort of militaria.

It seems that with the current political climate, people react negatively at the sight of anything from the Third Reich. Recoiling in fear of artifacts (from our vanquished enemy) is an unreasonable reaction. The preservation of artifacts, even something that came from an evil power such as Nazi Germany, serves to remind us of the the evils of socialism and fascism.

Yet another case dominated by Third Reich militaria.

These Imperial German spike helmets are impressive to see in person.

For a mere $2,500, one could take this beautifully dressed Imperial German spike helmet home.

A boxed Knight’s Cross of the Iron Cross was displayed (and for sale) next to the Imperial German spiked helmet. 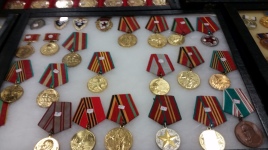 I am a veteran of the Cold War and seeing these Soviet medals being sold made me smile a little as I recalled the images of Russian officers with (seemingly) 60 pounds of medals pinned to their uniforms (see: https://bit.ly/2J0La8g).

With the Olympic show happening twice each year, the local opportunities are rather limited. I might consider driving to the Portland show in the future but that is about the farthest distance that I would consider traveling for militaria.  If you reside on left side of the continent, The West Coast Historical Militaria Collectors Show (billed as the largest gathering of military collectibles west of the Mississippi) might be a worthwhile place to seek the obscure or rare pieces that have eluded you.

If you have been a collector of militaria for more than a few years, chances are you have heard about The Show of Shows (SOS). The SOS is the largest gathering of militaria collectors and dealers and is hosted annually by the Ohio Valley Military Society. Imagine, countless rows of tables filled with all manners of militaria being offered for sale. If one cannot find pieces to complete a collection at such a show, then it is either extremely rare or non-existent.

For my humble searches, I will continue with my online pursuits of military artifacts (along with future birthday and holiday gifts)

Where to Look – Seeking Militaria in all the Right Places

Looking for a metal insignia device to fill a missing gap in your shadow box or a hole in your collection? This table had a decent array of insignia to choose from.