Remembrance of the Armistice and Giving Thanks

I have entered into a slower writing season that has me scratching and clawing for the time to write about militaria, military history or something in between. November of 2018 is nearly half completed and Thanksgiving is upon us. I let a few very significant dates pass by without a single mention on this site or on our Facebook page. I find it rather disturbing to give the appearance of ignoring the centennial of the Armistice of the Great War – a war in which several of my relatives served.

On display at the local event was this Imperial German Army tunic and helmet (with matching unit markings). Though over a century old, these pieces looked new.

How many of my fellow countrymen, even after last week, have an understanding of the correlation between “…the 11th hour on the 11th day of the 11th month…” and what is now recognized as “Veteran’s Day?” The United States is the only participating nation to have stripped away the significance of what is known by other Allied Expeditionary Forces (AEF) as Remembrance Day or Armistice Day. Our neighbors to the North along with other British Commonwealth countries, France, Belgium and even the principle aggressors, Germany take the time as entire countries to recognize the importance of the War’s end and the horrific losses suffered by all of the nations’ armed forces along with thousands of civilians caught in the crossfire and aboard ships at sea.

I am fully award of the significance of this year’s recognition and the need to preserve the legacy of those who went “Over There” and stood up to the tyrannical, empirical rulers of Western Europe and also stood by our allies (albeit more than three years, and hundreds of thousands of lost-lives too-late) in putting down the aggression.  In terms of personal connection to the War to End All Wars, I had the benefit of growing up with one of my family members (a great uncle) who served (and was wounded) in France which gave me a measure of perspective.

Besides my paternal grandfather’s older brother who enlisted into the Army soon after Congress declared war on Germany in 1917, his twin brother followed suit and enlisted into the Navy (he passed away at an early age in 1936), nearly 30 years before I was born).  Both of these men, born in Newfoundland had emigrated to the United States with their parents a few years after the turn of the 20th Century, served in their adopted country without being naturalized citizens. On my mother’s side, two more men also enlisted to serve during the Great War My maternal grandmother’s father and maternal grandfather served in the Canadian Expeditionary Forces (CEF).

An example of some American WWI artifacts from a private collection that was displayed inside the museum.

A fantastic canteen with a beautifully stenciled cover.

I have authored a handful of articles regarding the artifacts pertaining to these four men in my lineage and their service during World War I (so named in a June 12, 1939 Time Magazine article) that are in my collection. I had considered a public display of these pieces in conjunction with local commemorations that I knew were scheduled for this time of the year but I never followed through with reaching out to the organizations who were arranging these efforts. One step that I did take was to display parts of my Great War collection for a month at the state’s largest fair in September (see: Knowledge Versus Ignorance: Criticizing Displays of Historical Artifacts). Considering my efforts, I can take solace that I have honored the service of those in my family who took part in the Great War.

Among the AEF gear, are an assortment of lower leg protection worn by American troops ranging from puttees to laced leggings.

I loved the variations of U.S. belts and ammunition pouches.

Some of the individual weaponry of the dough boys of the AEF.

This past weekend, my son and I attended one of the WWI events that had been on my calendar, hosted at the museum at the nearby joint U.S. Army and Air Force base.  The base itself, came into existence just prior to the Great War and was rapidly built out as the need to induct and train troops heading over as the fighting raged on the European battlefields. Featured at the event were collectors (like myself) who displayed their artifacts and were donning uniforms (reproduction) to properly share their knowledge and talk about the artifacts. 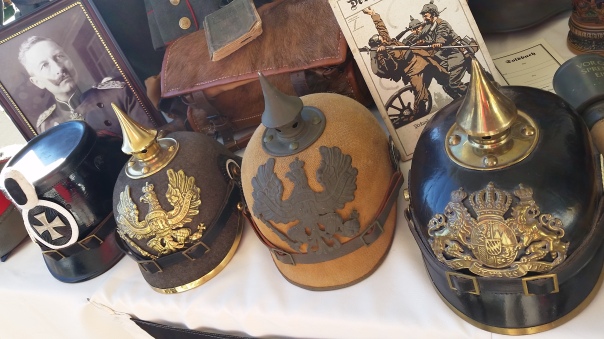 Three variations of the Pickelhaub and a German shako helmet all date from the Great War.

One of the aspects of the displays that I truly appreciated seeing at the event was that the perspective was not singular, representing only the United States forces. Along with the American militaria on display were collections that included British (with some French pieces) and Canadian. Even artifacts from the enemy were displayed (along with young men dressed in German re-enactment uniforms).  Seeing a well-rounded representation of personal equipment made the entire event far more interesting and left me with the understanding that my own collection would not have offered much more than what was already well-covered in remembrance.

This German WWI shelter and equipment display was set-up outside and apart from the American collections.

Belts, pouches, a helmet with original covering cases and other WWI militaria from British and Canadian forces.

While most Americans are busy celebrating the day of giving thanks by enjoying time with family and friends over a delicious meal, I will be doing the same and taking time to reflect on what my relatives were doing 11 days following the Armistice taking effect.  I am thankful that there are still young Americans who volunteer to serve with the understanding that they could find themselves in harm’s way in a far-off land much like their predecessors did more than a century ago.