← “Bluestar. Put all your clients in it”
Focused on Niche Areas of Collecting: USS Washington →

A Century Removed from the “Great War”

Throughout most of 2017 and continuing through nearly the remainder of this year, the people of this country are honoring the sacrifices made by Americans who answered the call to go Over There. More than a century has passed since Congress declared war on Germany (April 6, 1917) and the Central Powers (December 7, 1917). By Armistice Day (November 11, 1918) nearly five million Americans had served in the Great War; nearly 2.8 million of which had been deployed to Europe.

When I saw this comment written out on a recent social media post that  was focused upon honoring veterans who served and particularly those who gave their lives during what later became known as World War I, it struck me how little our society truly knows the conflicts that this nation participated in during our history. The author of the comment (that was intended to stir anger among that person’s crowd of similar-minded people) had no hesitation in demonstrating the sheer ignorance of the harsh realities of history, the reasons wars are fought (or ended) nor the personal sacrifices that are made. While striving to remain entirely devoid of the politics and gamesmanship of social media discussions, I chose to abstain from shedding light on the “Great” term or delving into the dictionary definitions and applications of the word itself.

Similarly, The Veterans Collection is apolitical as the intent here is to learn about the residue that has been left behind by military veterans following their service regardless of participation in a conflict or during peacetime. As I ponder the aforementioned angry commenter’s remarks, I am left wondering how that person arrived at such a thought. Is it due to the notion that governments (political leaders) are callous and uncaring about both the people within the opposition nation and their own servicemen and women (and their families) that they can, with ease and a pen, commission the deaths of human beings? Are we to believe also that those who put on a uniform (either voluntarily or by conscription) inherit such a mindset that to follow orders as they take the life of another person is done so without personal cost to themselves? While am in full agreement that there truly is nothing great about the damage and destructive results of war, I do not agree that all war is unjustified and without worthy cause.

The War to End All Wars began in Europe following the assassination of Archduke Franz Ferdinand of Austria and quickly escalated as old alliances were enacted as sides were split and fighting escalated. As more nations joined the fight, the scope and scale of the fighting spread beyond Western Europe and became a war of global proportions. The First World War was monumental in technological advancement – humanity had new and more impressive tools with which to kill greater numbers and with considerable ease. The loss of life was considerable as was the damage and carnage inflicted upon those who survived the technological terrors. The expansive destruction to the geography, towns and cities was large-scale and very impressive.

Greatness isn’t a celebratory or term of praise when paired with this massively devastating war.  In roughly four years, more than 8,000,000 combat deaths (nearly five million of which were suffered by the Entente Powers (the allied forces which included France, United Kingdom and the Commonwealths as well as the United States) making the losses not just massive but considerably GREAT.

I don’t doubt that people stumbling upon a site such as this that proudly honors the legacy and sacrifice of those who served their nation through the preservation of military artifacts is viewed upon as the glorification of war. I have even been accused of such glorification solely due to me possessing items that were seized from the vanquished enemy by my uncle. No combat-seasoned veteran or currently serving service member that I have ever encountered was or is eager to enter into war. “It is well that war is so terrible, otherwise we should grow too fond of it,” though uttered by General Robert E. Lee upon witnessing the carnage the Confederates inflicted upon Union forces at Fredericksburg. No, I do not glorify war but rather, I am repulsed by it. However, it is necessary in the extreme times to confront extreme human ills. If the likes of the Third Reich and the murderous Imperial Japanese forces were unopposed and left to continue their destruction of millions of people, where would we be?

My uncle’s overseas cap from WWI shows his standard “US” disk worn on the left side, forward portion.

My uncle’s WWI army uniform blouse. On the right sleeve. the shoulder insignia (the “A”) denotes First Army. The red chevron signifies an honorable discharge and the three inverted chevrons indicate 1.5 years of overseas service (each represents 6 months). On the left sleeve, the artillery shell and underline represent that he was a Gunner First Class and the single inverted chevron is a wound stripe (the precursor to the Purple Heart which was established in 1932)

Yes, I collect artifacts of war. These pieces are not symbols of violence but instead, are pieces of history that help to illustrate the narratives of personal sacrifices made by millions of my countrymen up to and including my father, grandfather, uncles and many preceding generations. Within my collection are several pieces of militaria that originate from the Great War with most of them having been inherited or are associated with one my relatives who enlisted to fight Over There.

My grandfather’s older brother (seated at left) enlisted into the artillery (CAC) and was sent to France in the summer of 1918. He was wounded by artillery shrapnel and hospitalized until the spring of 1919 when he was discharged.

My uncle Nill enlisted into the Navy and served his entire career aboard battleships. As far as my research has provided, his ships never left the Pacific and so did not see enemy action. 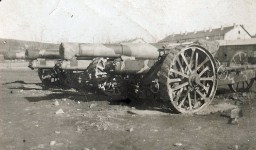 Two of my uncles – my paternal grandfather’s twin elder brothers – each concealed their age to enlist into the U.S. Armed Forces (one went into the Navy and the other as an artilleryman in the Army) at the ripe old age of 17.  Two of my maternal great grandfathers also served during WWI. One of them, my great grandfather, first enlisted into the Canadian Expeditionary Forces (CEF) as a Private and was discharged several months later (he immediately enlisted into the Royal Naval Canadian Volunteer Reserve and served the duration of the war, domestically). My 2x great grandfather enlisted into the CEF just 19 days shy of his 48th birthday. A housebuilder and carpenter by trade in both his hometown of Leicester, England and his adopted home of Victoria, BC, my great great grandfather volunteered for the Canadian Forestry Corps and was sent to Europe to fill the need for lumber (used as trench materials such as duckboards, shoring timbers, crates) in the war effort.

My WWI collection isn’t large by any stretch of the (my) imagination. In addition to the pieces that I inherited as part of my family’s military history, I have been adding pieces to enhance or to fill in where I notice gaps and to be able to create a better display when I have such an opportunity.

One of my uncles enlisted into the Army and was assigned to an artillery regiment (under the Coast Artillery Corps) and served in France from 1918 until late 1919. I purchased this well-worn pillow cover as a reminder of his service during the war.

Homefront pieces such as this 1918-dated U.S. Navy pillow cover helped to remind family of the service of their loved one as they openly displayed their patriotism in their homes. When I acquired this several years ago, there seemed to be several listings over the course that year (2011). I haven’t seen any listed in several years, since then.

Since one of my uncles served in the Navy during the Great War, I wanted this pillow cover to compliment the Army Artillery cover that I acquired (in honor of his twin brother). The detail in the embroidery is subtle yet ornately executed.

This close-up reveals the detail of the cover with the hand-cut lettering and insignia and the needlework on the naval crest and chain.

Other pieces of my WWI collections range from edged weapons, books and publications and many photographs. Some of the collection, besides my familial focus, has local a connection. I have been slowly gathering pieces that originate from navy warships that were named for local cities, features or were stationed at any of the naval bases, locally.

Over the next few weeks, I will begin pulling everything pertaining to the first world war, taking stock of each piece and preparing it for a few upcoming public displays. I need to determine how I want to arrange the pieces in order to allow the artifacts to tell a story, not of war and suffering but of personal sacrifice while recognizing the prices paid by so many Americans a century ago. My goal with my displays is to avoid the glorification of war while allowing viewers to leave with a slight taste of what others endured in order to secure and preserve our freedoms.

“What a cruel thing is war; to separate and destroy families and friends, and mar the purest joys and happiness God has granted us in this world; to fill our hearts with hatred instead of love for our neighbors, and to devastate the fair face of this beautiful world!”  – Robert E. Lee, December, 1862

The first global war was horrible and terrible and it was truly great in the human (and monetary) cost.

Posted on August 2, 2018, in World War I and tagged AEF, Artillery, CEF, Global War, Great War, the war to end all wars, World War I, WWI. Bookmark the permalink. Leave a comment.

← “Bluestar. Put all your clients in it”
Focused on Niche Areas of Collecting: USS Washington →