When visitors read the entirety of the articles published on The Veterans Collection, It may seem as though I favor Navy items with my militaria interest. Though all branches of the armed forces are represented within my collection, being a Navy veteran, I suppose that I pursue mostly what I know. Within the area of naval militaria, tend to prefer the enlisted uniforms above those from the officer ranks. An even deeper dive into what has been published on this site indicates my level of interest within the sphere of rating badge insignia. 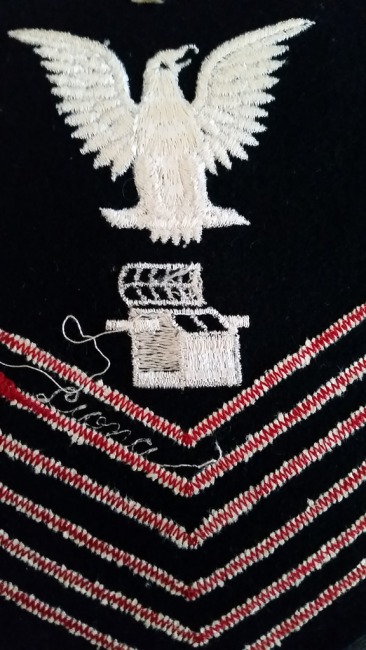 This Fire Control Technician 1/c shows the script, “Liona,” the trademark of Lion Brothers on the reverse side.

For me, collecting rating badges amounts to a walk through history. As one can select virtually any current rating and begin to trace its roots of development back to the beginning of the naval service. With my own rating, I constructed such a lineage – a family tree of sorts – that resulted in what is today the Operations Specialist (see: Tracking U.S. Navy Specialties: The History of Radarmen). The designs of the rating badges themselves have been taken through a progression that commenced with sailors hand-embroidering their own directly from an ink-stamped fabric pattern to today’s mass-produced (and quite sterile, in my honest opinion) rating badges (see: Navy Enlisted Ratings Eliminated: What are the Impacts on Sailors and Collectors?). Though I have spent a bit of effort researching and sharing my results in this collecting focus, a recent question submitted to our Contact US form revealed that there is still more to share in regards to rating badges that will help collectors, family members (who, like me, inherited pieces from a veteran relative) and folks who are simply interested in navy uniform history.

“As I was flipping through my father’s uniform patches, I noticed that the woman who embroidered them had also embroidered her name on the back (and) I was wondering if anyone else had noticed that?”

While all of the articles that are published here have dealt with what appears on the front, I have yet to deal with the information that appears on the reverse of many rating badges. With markings applied in different manners (chain stitched, woven or ink-stamped) and with varying information, the meaning of some of the information is self-evident while others are rather cryptic leaving collectors to only speculate as to who applied them and why.

For a few years leading up to World War II extending to well in the 1960s, many rating badges were marked on their reverse sides (though a larger percentage of them were manufactured with blank backs). One expert, John A. Stacey, a preeminent U.S. Navy rating researcher and collector has narrowed down many of the embroidered details and provided the details in his book, U.S. Navy Rating Badges, Specialty Marks & Distinguishing Marks 1885-1982.

Perhaps the best way to approach the marks is to group them by the two types of marks: Manufacturers and Dates.

These Fire Controlman rating badges were made by Blumberg Bros. in New York.

This Molder 1/c is marked with “N Y” and is most likely made by the New York Emblem Company.

This still unknown “C” mark (slightly obscured by the red embroidery stitch) is located at the bottom-most chevron of this first class petty officer rating badge.

Although it seems to be a white rating badge, this chief radioman on khaki features the embroidered anchor mark on the bottom point of the upper chevron.

Manufacturers:
While this list indicates a handful of rating badge suppliers, in reality there were countless manufacturers providing the Navy with millions or rating badges though the large majority left their work unmarked. Some of the manufacturers’ marks that I have on rating badges within my own collection (indicated below with bold) are the more commonly found varieties. Two of the marks (“C” and the anchor symbol) remain a mystery as their origins or, perhaps what the marks represented. While I do own a confirmed GEMSCO rating badge, it was manufactured in the early post-war years and lacks a physical embroidered mark (it is sealed in the branded cellophane). The wartime GEMSCO, Danecraft and Vanguard marked badges are embroidered in similar fashion to the Liona-marked badge (seen in the first image shown above).

Besides the maker’s marks being embroidered onto the backs of badges, collectors may also find ratings with what appears to be dates affixed in various locations.

These Torpedoman 1/c and Chief Boatswain’s mate rating badges have the dates placed in the apex of the top chevron.

There is debate among collectors regarding what the date information refers to. While preeminent rating researcher John Stacey has determined that the four digits mark the date that the badge was made. Other prominent collectors with years of experience believe that the date pertains to the year that the contract was awarded (by the Navy Department) for the manufacturing of the badge. If it is a contract date, it is possible that it also coincides with the manufacturing date. However, it could have been made within the contract year or in those that follow. It is not precisely known when the dates began to be applied to rating badges but I have seen some (displayed in others’ collections) dated as early as 1936. Embroidered dates are consistently located in a few places on the reverse sides of these 1930s-40s rating badges.

While I have several hundred rating badges, the majority of them with back embroidery carry the Liona markings. The earliest date mark that I have is from 1941 and I only have one or two of the C and Anchor marked-badges. I will always be on the lookout for other rating badges with these specialized markings but only if what is on the front aligns with what I collect.

* BeVo weave is a machine-woven process developed in the early 1800s by a Frenchman named Jacquard. The manufacturing process  used a roll of material that was fed into a weaving machine synchronously as a card strip (that had a series of holes forming the design pattern used as a guide) was fed in. The mechanical elements would extract the information from the card and weave the design into the base material. In the late 19th and early 20th century, European military uniforms were adorned with rank and insgnia manufactured using this process. “BeVo” is a combination of words (“Be” from the German word for partnership: beteiligung and Vo from vorsteher: derived from the merging of two German firms –  Lucas Vorsteher and Ewald Vorsteher).