Wahoo! A Bounty of Historical and Antique Books!

There are abundance of book dealers and vendors to visit at the Seattle Antiquarian Book Fair and attendees should spend time in each booth to find the treasures they seek.

Having attended many types of collectibles (sports memorabilia, coins, comic books, etc.) and antique shows over the course of the past few decades, I can attest that this event (that held my attention for several hours) was probably the most captivating of them all.

Knowing that I had not previously attended a show of this nature, one of my militaria collector colleagues told me about the Seattle Antiquarian Book Fair and that there would be book dealers who specialize in military history and associated rare and hard to find publications. Knowing that I’d have an opportunity to locate an out of print work or simply peruse literal pages of military history made attending this show an absolute must. 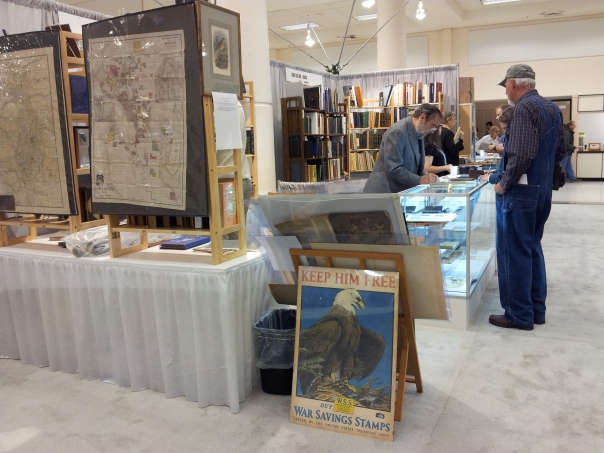 While the Seattle Antiquarian Book Fair is dominated by vintage and collectible books, there is also a considerable amount of ephemera, such as this WWI war savings stamps poster, for sale. 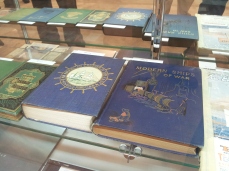 These two late-19th century books are in pristine condition.

Waiting in line to enter the exhibition hall, a staff member briefed the eager crowd about the rules, in order to provide the sellers with a measure of inventory security, to gain admittance: there would be no heavy coats, large bags or loose books allowed in. Once I checked my coat, I walked through the large double doors and my eyes immediately widened. From the highly organized booth spaces, complete with LED-lighted glass display cases and large bookshelves and wall-to-wall carpet, one could tell this wasn’t the typical gathering of vendors.

The very first display that I visited, my eyes were overwhelmed by the pristine, recognizable titles. I began to peer into the gleaming displays featuring books and noted works that were worthy of the bright lights and presentation. Books from the 18th and 19th century in pristine condition were sitting side-by-side with rare, one-of-a-kind manuscripts and documents. Booth after booth, I was continually amazed by each vendor’s wares.

Although not specifically militaria-related, this late 18th century whaling ship log (from two ships; the Harlequin and Leviathan) was an amazing piece of history to see. At $75,000, it was a few “zeros” out of my financial reach.

Yet another whaling ship log. This one for the vessel, William, dates from 1838. Note the whale stamp next to the latitude and longitude entry.

The aircraft carrier USS Saratoga’s WWII cruise book is in absolute pristine condition and was available for only $200.

Unfortunately for me, most of the pieces that truly held my interest had price tags well into the thousands (such as the Narrative of the Mutiny aboard His Majesty’s Ship Bounty published in 1790 for a mere $12,500, which was exceptional). Had my bank account been more flush, I would have had a much more difficult time trying to make a decision between the various historic items for purchase.

For a mere $30, this later printing of Medal of Honor recipient Greg Boyington’s autobiographic work was a steal…

…That it was autographed was extremely enticing, even though I already had signed copy!

With a few dollars burning a hole in my pocket, I knew I couldn’t leave the show empty-handed. Having walked the entire show over the course of a few hours, I returned to an earlier-visited vendor who specializes in military books and selected the signed first edition of Medal of Honor recipient Rear Admiral Richard O’Kane’s World War II narrative about the legendary submarine, the USS Wahoo and her fearless skipper, Commander Dudley “Mush” Morton.

After visiting the military book vendor’s booth several times, I was drawn to add to my collection of Medal of Honor recipients’ autographs; purchasing Rear Admiral O’Kane’s work on the WWII submarine, the USS Wahoo.

With a few dollars burning a hole in my pocket, I knew I couldn’t leave the show empty-handed. Having walked the entire show over the course of a few hours, I returned to an earlier-visited vendor who specializes in military books and selected the signed first edition of Medal of Honor recipient Rear Admiral Richard O’Kane’s World War II narrative about the legendary submarine, the USS Wahoo and her fearless skipper, Commander Dudley “Mush” Morton. 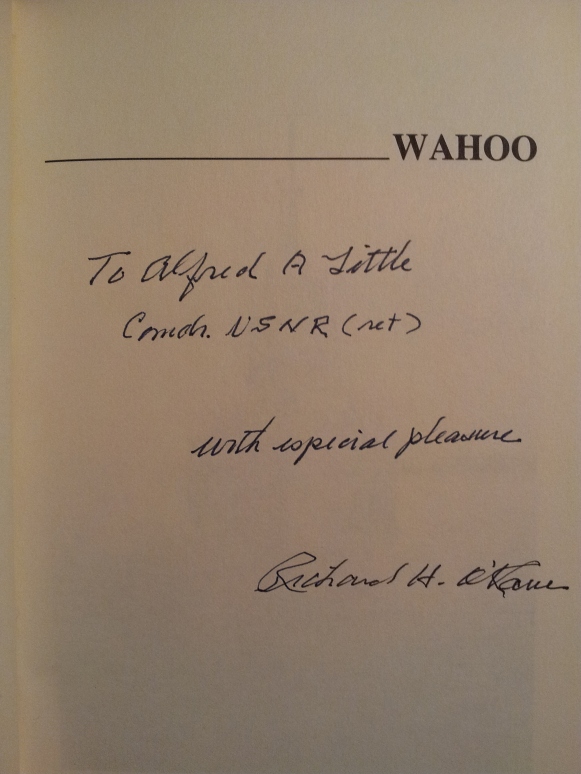 My first edition copy of Wahoo is autographed by Rear Admiral Richard O’Kane.

My feet thoroughly tired and my hunger pangs overwhelming me, my time at the fair drew to a close and I was happy to be leaving with a piece to add to my collection of autographs from notable military veterans.