The Blades That Got Away

Is there truly such a thing as being too greedy? Can someone be overcome with coveting? I am certain that the pursuit of objects (of my desire) is a pathway that I should try to avoid (or, at the very least, make a concerted effort to avoid), but in some cases, the end result is a boot print in your own derriere after passing on the opportunity to acquire a beautiful piece of militaria.

Sadly, I only have photos of the Model 1860 Cavalry Sword’s handle.

A few years ago, a relative of mine who was a militaria collector (specifically, Civil War) passed away after a lengthy illness. At the time of his passing, his collection included Spanish-American War rifles, post Civil War belt buckles, and an assortment of edged weapons spanning more than 100 years and representing multiple branches of service.

Showing the Back side of the Model 1860 Cavalry Sword.

Knowing that I have a passion for military history and military collectibles, though I am by no means an expert, my family asked for my assistance in identifying certain items and assessing values for the estate. Notebook, pen and Blackberry (with a built-in, crummy low-resolution digital camera) in hand, I made my way over to my relative’s home to begin my work.

Prior to my arrival, all of the militaria pieces had been gathered (piled) into one of the rooms and I was immediately overwhelmed by what was there. Separating the items I could easily identify from those that needed research, I began to document and inventory everything. I knew that because of the assistance I was rendering, I’d have the first opportunity to purchase anything that interested me, should the beneficiary choose to sell.

Showing the hilt and maker’s marks on the Ames Model 1832 Artillery Foot Sword.

Diving into the edged weapons, I quickly jotted down the details – M1904 Hospital Corps bolo, M1910 Bolo Machete,M1913 Patton Sabre, WWII USMC Pharmacist’s Mate Bolo, many types of bayonets… the list went on. The two pieces that really caught my attention were very old. One, an M1832 Foot Artillery sword and a Model 1860 Cavalry Trooper’s sword. Both were in pristine condition.

I went home and did my research, comparing the photos I snapped against those of the various online and printed references. Adding up the blades and the corresponding values, I set aside the funds in order to pay for the ones I wanted and submitted the work to the estate. I intentionally left off the two oldest blades as I my budget couldn’t accommodate those high-dollar (for me) purchases. 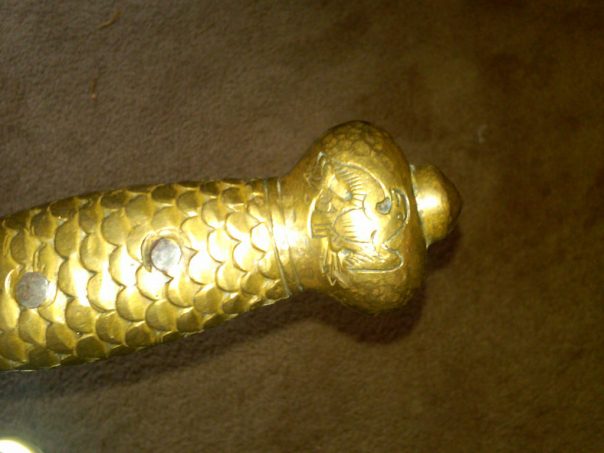 Showing the eagle in the Ames Model 1832 Artillery Foot Sword. This one is dated 1840.

A few months later, the blades that I was seeking to acquire were delivered to me as a gift. The other pieces that I turned away were sold – for pennies on the dollar – to the estate sales company that was contracted to liquidate the personal property. I was heartbroken. The two blades that I really wanted for my collection were sold at such a low price, I could have easily paid for them even if I was required to buy the blades that I had been given.

Because I chose to collect within my means, someone else benefited and made a killing on these two blades. I will think twice before I make this decision again.