Approaching June 4, many Americans will be reminded of a pivotal event that took place on this very day during World War II, when a massive armada of ships carrying troops that were preparing for an invasion (that would commence on the morning of June 6th, 1944). The plan was to establish a foothold in enemy-held territory, extending their reach with a new base of operations. Thinking of this date in particular, Americans will conjure thoughts of paratroopers flying over a stretch of water as they begin to traverse flak bursts en route to their targets.

For the past several years, veterans and their families have made their way to the hallowed ground on the beaches and drop zones in and around Normandy, France, seeking to re-trace their steps on the ground where the D-Day Invasion commenced. Though few of those brave men remain this eve of the 72nd anniversary, the children of those veterans will be joined by grateful citizens as they remember the sacrifices made by so many men on that day in 1944. With so much attention given to Normandy (especially by Hollywood in recent years with Saving Private Ryan and the Band of Brothers series), typically overlooked (when thinking about this date) is a battle that arguably had the same or even greater impact on the War’s outcome.

The Battle of Midway took place at a time when the U.S. was still ramping up to fight, having been caught unprepared for war. American Army ground troops wouldn’t be committed for a full-scale assault until November of 1942 with Operation Torch in North Africa. The Marines wouldn’t begin any offensive campaigns until landing craft bow ramps were dropped onto the shores of Guadalcanal. This meant that the majority of the fighting that was taking place since December 7, 1941 was being carried out by U.S. naval forces.

Owning a sailor’s photos may seem odd to some, but they could be one-of-a-kind images that you otherwise might not see. This hand-painted USS Minneapolis photo album is a fine example (source: eBay image).

This group of medals from a USS Enterprise veteran largely contains modern hardware. The dog tags appear to be original to the veteran (source: eBay image).

In commemorating the 70th anniversary of the battle, regrettably little ceremonial attention will be paid to the few surviving veterans who are, at the very least, in their late 80s. Yet, we need to remind ourselves of the significance of this battle and remember those who risked it all and sent the Japanese forces into a three-year retreat.

Being a collector (primarily interested in Navy militaria), it takes a fair amount of legwork and an awful lot of providence to acquire authentic pieces that may have been used during this battle. We have to ask ourselves, “what would be the most target-rich focus area that we can pursue for treasure?” Clearly, the answer to that question would be veterans’ uniforms. Considering that there were two task forces containing 28 vessels (and 260 aircraft), there would be literally thousands of veterans each with multiple uniforms to choose from–if you can determine that they actually participated, attached to one of these units.

Those interested in obtaining pieces of ships or aircraft will have an infinitesimal chance to locate authentic items for their collection… but that means there is still a chance. Below is a list of every U.S. Navy ship that participated in the battle (I’ll leave it up to you to research the participating aviation squadrons from the carriers and Midway Island):

This Battle of Midway Commemorative Pillow appears to have been produced during WWII (source: eBay image).

Remember, you can also seek commemorative items, vintage newspapers or original photographs, or named (engraved) medal groups from veterans who fought in the battle – creativity and a lot of research will help you reap great reward!

Posted in US Navy, Warships or Vessels, World War II

Over the past few weeks, I have taken a little time to focus on other priorities such as my primary job (I don’t write on a full-time basis), my family and my fitness (not necessarily in that order). In response to that focus, my attention had shifted away from militaria and the various aspects of collecting during that period of time. Now that we are in the latter half of May, I need to bring my thoughts back to my passion for military history as one of the most important holidays (in my opinion) draws near.

Turning on the news this morning, my interest in the weekend forecast is piqued as the meteorologist begins to discuss the cooler than normal temperatures, the risk of rainfall and how these conditions will impact camping, boating and backyard barbecue plans. The statement really struck me as my only considerations for this weekend surrounded spending time at the various cemeteries and placing flags on fallen veterans’ graves and those of my veteran ancestors and relatives. This activity is something my wife and I have been doing dating back to my time in uniform. Making alternative plans is never a consideration and now my children are so accustomed to this practice, they look forward to Memorial Day.

As our culture continues to morph and shift with each passing year, the gap of time expands and the meaning and origins of Memorial Day fade from the American population’s conscience. In a time where less than half of one percent of Americans are serving in uniform, there is virtually no understanding of the personal sacrifices (that are routinely paid by those on active duty). When someone falls on the battlefield, that societal understanding of the price paid  just isn’t there. I increasingly wonder how it is that we arrived at this point.

With fewer Americans serving in uniform, particularly during the current wars in Iraq and Afghanistan, general population is disconnected from the costly nature of service. It is no wonder that our culture tends to be more self-focused as they spend Memorial Day without considering the sacrifices that afforded them the freedom to enjoy a three-day weekend.

World War II Veteran Mac MacKay pauses for reflection after placing a wreath aboard his former ship, the LST 342, during a trip that several veterans made to Guadalcanal and Tulagi in 2009 (Photo courtesy of Anderson Giles).

Through my quest to understand the origins of this particular holiday, I have been led to be more forgiving of people who choose outdoor activities over trips to cemeteries. Considering that the present-day Memorial Day federal recognition was born from Decoration Day – a tradition started following the end of the American Civil War as surviving veterans began to deal with the battlefield losses of their comrades. Over the passing years, these veterans formed various veterans organizations (ranging from unit-specific to the enormous such as the GAR and UCV) and took the lead on preserving the legacy of those who made the ultimate sacrifice. Because of the efforts of these groups, battlefield and cemetery preservation and monument construction efforts were undertaken along with ceremonial gatherings for commemorative dedications.

Decked in his cavalry uniform, this old veteran places a wreath among the graves of veterans on Decoration Day.

Throughout our nation’s history, it has been the veterans who have taken the lead on honoring the war dead. Mourning the loss of a brother (or sister) who fell on the field of battle is something a surviving veteran never forgets. That moment isn’t simply a memory etched into their minds but rather akin to a remaining scar in place of a missing limb. It cannot be forgotten or, as some civilians would suggest, something to “get over.”

In this postcard, an old Navy veteran donned his uniform before carrying his anchor-shaped flower arrangement to the monument to render honors to the dead of the Civil War.

A few years ago, I started taking notice of various references to Decoration Day and antique items that make mention of it. One of those items that caught my attention was a postcard (from the early 20th Century) depicting an elderly Civil War veteran placing a wreath of flowers at a grave. The image, an illustration, was so moving that I was overwhelmed with emotions. The postcard evoked more recent memories of World War II veterans (at D-Day celebrations) paying respects to their fallen comrades some 70 years hence and the fresh, vivid memories painted across their faces. 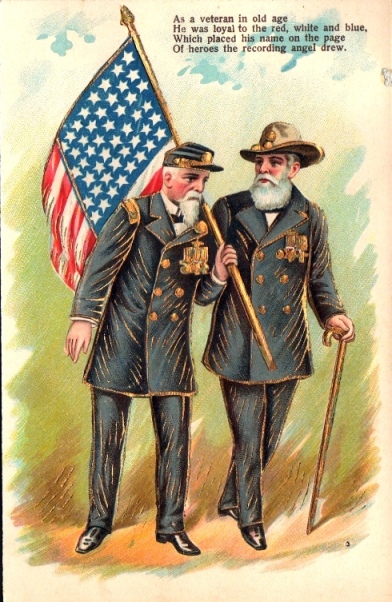 This Decoration Day postcard depicts two elderly veterans of the Civil War assisting each other as they honor their comrades who fell in battle.

Over the course of the past century, it seems that nothing has changed. Veterans still ache for their lost buddies and they are compelled to continue to honor them as long as they are physically able to do so. As a veteran, I am committed to continuing the tradition of honoring and remembering those who gave their last full measure protecting and ensuring freedom for future generations.