Why Do You Collect Militaria?

After publishing more than 100 articles (this is my 106th, to be precise), it is odd that I would make a U-turn and head back to a topic that I should have posted when I commenced this militaria-writing venture. There are many times when I find myself in conversations with people when I am explaining my unusual interest of gathering artifacts that were used in the armed forces in some capacity. I have touched on various aspects of my own rationale behind my interests in several posts, however nothing as fundamental or foundational to what lies at the root of my interest. Though I have been actively collecting artifacts since 2008-9, my interest in militaria began many years earlier.

What is Militaria? Merriam-Webster defines it as “military objects (as firearms and uniforms) of historical value or interest.” The definition of the word is fairly ambiguous and vague when one considers what could fall into the category of military objects.

The categories of military objects can be quite expansive ranging from matchbook covers and photographs to uniforms and weapons. There is something for anyone interested in almost any aspect of military history. As with most collectibles, militaria objects can cross over into multiple categories which can bring larger audiences and have significant influence on pricing. For example, in the area of military patches, militaria collectors can find themselves competing with Disney collectors for Walt Disney-designed aviation squadron patches from World War II. Vintage photograph collectors may be competing with the militaria collector for the same WWI yard long images.

Crossover collectability is good for the hobby as it provides opportunity to focus on specific interests that may be out of the mainstream for either facet. While many militaria hobbyists gather M-1 helmets, insignia, or edged weapons, very few seek out matchbooks. 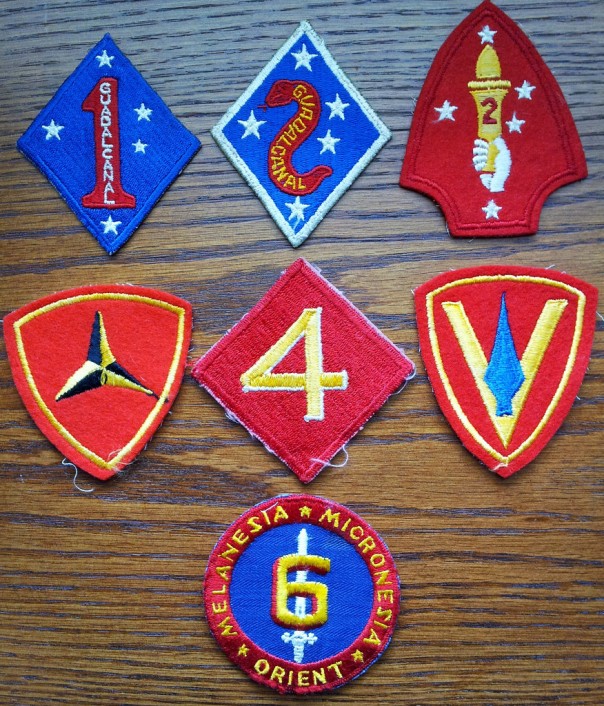 One might focus solely on collecting patches (or shoulder sleeve insignia – SSI). These are the Marine Divisions (1-6). Shown are two versions of the 2nd MarDiv. Three of these patches are wool felt.

My own interest in militaria was fostered during my quest to uncover the details surrounding the military service of my ancestors and family members. I also inherited a number of personal effects (militaria) from a few of those veterans which drove me to document their service. As with collecting, one item led to another and soon I found myself piecing together shadow boxes honoring their service and assembling their uniforms for display purposes.

Where do your interests lie? Nineteenth century, Napoleonic wars? Eighteenth century British naval officer uniforms? Medals and decorations of the former Soviet Union? Or perhaps your interests lie in the current conflicts of the United States (Iraq and Afghanistan). One can specialize in assembling the various uniforms for WWII women’s services such as W.A.C., W.A.V.E.S. or W.A.S.P.– but be prepared to pay premiums for these hard-to-find items. Whatever your interest, you should find a collecting niche that aligns with your interest. 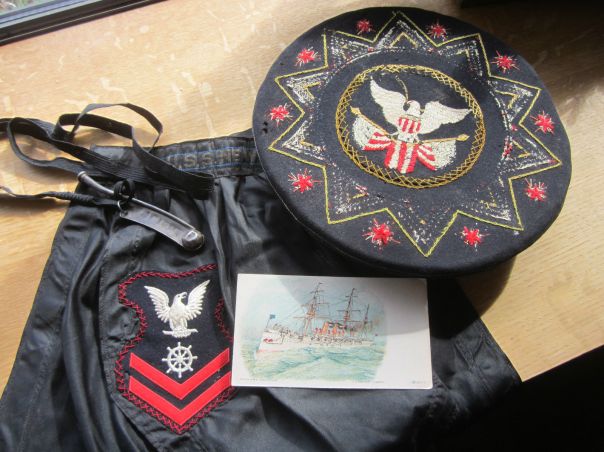 This embroidery-embellished USS Newark flat hat group garnered significant attention when it was listed at auction. Having a piece like this in my collection would be a fantastic addition
(Source: eBay image).

Unless you inherited a museum full of artifacts, narrowing your collecting is advisable with the considerable financial outlay you will be facing as you expand or fill in the gaps in your collection. Instead of broad categories such as anything World War II-related, one can be very specific and pursue items from the U.S. Army 4th infantry division. Uniforms, insignia, notable personalities, valor medal recipients or any number of special interests would make the hunt exciting and possibly keep costs manageable. 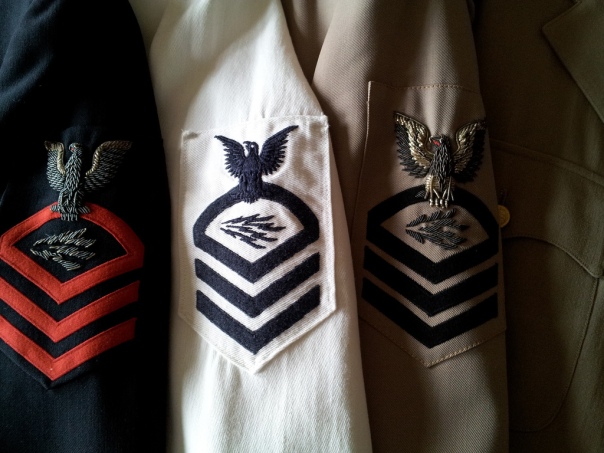 I acquired these WWII vintage Chief Radioman uniforms to create a representative display recognizing another family member’s service. Though I did inherit many family military artifacts, I do still try to either have a representation or simply complete what is missing from what I received.

My collection consists of uniform items, medals, ribbons, documents and photos. All of which has context or tie-in to my family history. In addition to the displays and groups I have assembled, I also have acquired some items that have piqued my interests (or distracted me). While I haven’t purchased any of them, I did manage to obtain a nice group of Third Reich militaria that was “liberated” by one of my relatives, a U.S. Army officer. But in keeping with my focus, I haven’t pursued any additional items to add to that theme.