← Showing Off Your Collection is Not Without Risk
A Collection of Buildings with a Nice Lawn: A Large Piece of British Military History →

A Bullet with No Name

Most people who know me would agree with the statement that I take pleasure in the obscurity and oddities in life. If there is any sort military or historic significance, my interest is only fueled further.

Militaria collectors have heard the same story told countless times by baffled and befuddled surviving family members – the lost history of an object that (obviously) held such considerable personal significance that a veteran would be compelled to keep the item in their inventory for decades. For one of my veteran relatives, that same story has played out with an item that was in among the decorations, insignia and other personal militaria, preserved for fifty-plus years. 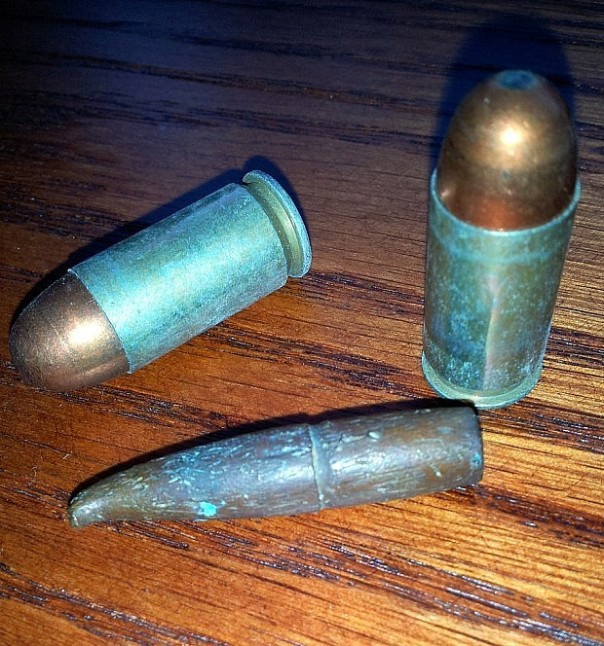 The crimp ring around the middle of the bullet’s length shows where the top of the bullet casing was pressed against the projectile. When compared to these WWII .45cal rounds, it becomes apparent that the bullet is in the 7mm bore size-range.

When I received the box of items, I quickly inventoried each ribbon, uniform button, hat device and accouterments that dated from his World War I service through the Korean War. The one item that caught me by surprise was a long, slender lead projectile with a mushed tip.

They are difficult to make out with the naked eye, but the markings are “A-T-S” and “L-V-C”. The character in the center doesn’t appear to be a character at all.

It was clear that this blackened item was a small arms projectile. Based on size comparison with 9mm and 7.62 rounds, it was more along the lines of the latter, but it was clearly not a modern AK/SKS (or other Soviet-derivative). Perhaps it was a 7mm or smaller round? Without any means to accurately measure the bullet, I cannot accurately determine the bore-size or caliber. I’ll have to leave that for another day.

Further examination of the object proved to me that it was bullet that had been fired and had struck its target, causing the tip to blunt. While I am not a ballistics expert, I have seen the markings that firing makes on a bullet. This round clearly has striations that lead me to believe that it has traveled the length of a rifled barrel. It also possesses a crimping imprint, almost at the halfway-point on the projectile.

So what does all this information mean? Why did my uncle hang on to it for all those years? Had this been a bullet that struck him on the battlefield? Had it been a near miss?

In this view, the mushed tip is easily seen, as are some of the striations.

My uncle passed away 20 years ago and the story surrounding the bullet sadly died with him. Since he bothered to keep it, so will I along with other pieces in a display that honors several of my family members’ service.

← Showing Off Your Collection is Not Without Risk
A Collection of Buildings with a Nice Lawn: A Large Piece of British Military History →