← Following the Flag
Fall In! Getting Back to Militaria After a Long Summer →

To Whom do Artifacts Truly Belong?

This cigarette box is engraved with the names of four WWII naval aviators (engraved” Best Wishes to The Torpedo Captain”). Though this piece is in my collection, as a collector, I am merely a steward of the history associated with it.

Historians, museum curators, historians and collectors all have differing, yet valid answers to the question of historical artifact ownership. Aside from the debate as to where an artifact belongs, there can be difficulties for collectors surrounding rightful ownership that can have more nefarious roots and beginnings.

While watching an episode of the popular PBS television program History Detectives, a woman desired to learn more about a boxed set of named (inscribed) mid-19th century Derringer pistols (season 10, “Civil War Derringers, KKK Records & Motown’s Bottom Line”) that her father purchased in the 1970s. The woman had previously had the Derringer set appraised on another PBS show, Antiques Roadshow (Pittsburgh #1607) for $30,000 but she had no idea who the original owner was or any details surrounding the history of the pistols. Included with the pistol was a document detailing the post Civil War pardon of a Confederate soldier – the name matched the one inscribed on the pistols.

The “detective,” Wes Cowan embarked on a quest to learn about the original owner (John P. Thompson) and if he was, in fact, a Civil War veteran and to learn his history if at all possible. The trail that Cowan followed ultimately led to the great, great-granddaughter of John C. Thompson who told the story of her ancestor and how the pistols were stolen from the ancestral home in the 1970s. To whom do these pistols belong?

My entrance into militaria collecting began more as a matter of happenstance rather than an active pursuit. Having a passion for local area history and genealogy began for me at an early age. As a child, I would often imagine myself digging up arrowheads or other historical artifacts while digging in the backyard or the adjacent vacant lot. Sparked by my grandfather’s stories of the “Indian Uprising” in present-day Pierce County (the father of his childhood friend told him stories of their family evacuating to the safety of Fort Steilacoom), I would picture myself finding my own piece of history.

I never pursued any real archaeological adventures as my focus shifted toward sports and other adolescent activities. After completing my schooling, I was thrust back into history but this time with a military focus when I was assigned to my first ship (following boot camp and my specialty school). I was immersed into the legacy that led to the naming of my (then) soon-to-be commissioned U.S. Navy cruiser. I began to dialog with the veterans of my ship’s namesake predecessors from WWII. From that point on, my interest in military history was truly piqued.

This sampling of Third Reich militaria items were passed down to me from my uncle (who served in the U.S. Army MIS/CIC). He sent these peices home from Germany in 1945 having liberated them following the collapse of the Wehrmacht.

Collecting, for me, began when I was asked to bring my interests and research skills to bear on some artifacts belonging to my uncle that had been stored for 50 years in my grandparents’ attic. The items were in a few trunks that were unopened since they were packed by my uncle and shipped from Germany in May of 1945. I knew very little about Nazi militaria but was up to the challenge to ascertain value and locate a buyer (my grandparents needed money to help cover their costs of care) for the artifacts. I spent a few months learning about the various uniforms, flags, headgear and badges. Little did I know that I was being immersed into the world of the high-dollar Third Reich collecting (yes, I sold most of the pieces).

My uncle served in three wars (WWI, WWII and the Korean War) rising from private to captain. This uniform and bag are from his service with Battery F the 63rd of 36th Coast Artillery Corps.

A few years later when I received my maternal grandfather’s uniforms, records, medals, ribbons, etc., I began to understand that while these items are in my possession, they really do not belong to me. I am merely safeguarding and preserving them for posterity. This has become more evident during my search for anything relating to my ancestors who served in previous centuries. I often wonder what became of their militaria. In watching the History detectives episode, my concern for lost family history is decidedly more acute as I have yet to locate a single photo (of my lengthiest pursuit – my 3x great-grandfather who served in the Civil War).

In actively pursuing items now in my collection, I have acquired a handful of pieces that have names inscribed or engraved of their original owners. The thought has occurred to me that the potential exists for a descendant to claim rights to anything that bears a name.

People fall on hard times or may not possess interest in the military history of their ancestry. A financial need or the desire to free up storage space can drive people to divest themselves of military “junk” without pausing to realize their own connection to that history. In some cases, the heir of militaria may pass away severing ties to the historical narrative thereby devaluing it entirely.

While one person (family member “A”) could have inherited an ancestor’s militaria and subsequently opted to sell, another relative (family member “B”) might have not have been provided the opportunity to retain the history within the family. I have seen stories of this scenario playing out where family member “B” notices a post by a collector (in an online militaria forum) about something recently acquired. “B” feels the need to reach out to the collector to restore the item back to the family, often times to the point of accusing the collector of being a party to theft.

I can identify with the plight of family member “B” in the desire to regain the lost family artifacts. However, I do respect that militaria collectors are some of the most generous and considerate people. I’ve seen them go out of their way to restore artifacts to the family – sometimes at their own expense. However, I advise that family members should exercise decorum and restraint while not expecting a collector to side with them and relinquish their treasured artifacts.

In early 2012, musician Phil Collins published a book detailing his passion for militaria connected to the Alamo and the people who fought and died there. Beginning early in his career, his passion for this infamous siege and battle between the Santa Ana-led Mexican army and a small, armed Republic of Texas unit (led by Lt. Col. William Travis).  Collins beautifully displayed his collection across the many pages of his coffee table book, The Alamo and Beyond: A Collector’s Journey. Though his publication was well-received among collectors, it did open the door for a legal challenge to the ownership of several artifacts in his possession.

Last week, I posted an article detailing one person’s pursuit of a historic handmade U.S. flag on behalf of her former-POW father. The bedsheet-turned-national-ensign had been gifted to the U.S. Navy by the owner’s family to ensure its preservation and safekeeping to share for future generations. The veteran’s family felt strongly that the flag, while steeped with familial history and significance, the flag belonged to the citizens of the United States rather than it being relegated to  “molding away in someone’s attic” or seeing it “thrown away by someone who did not know the story behind it.” 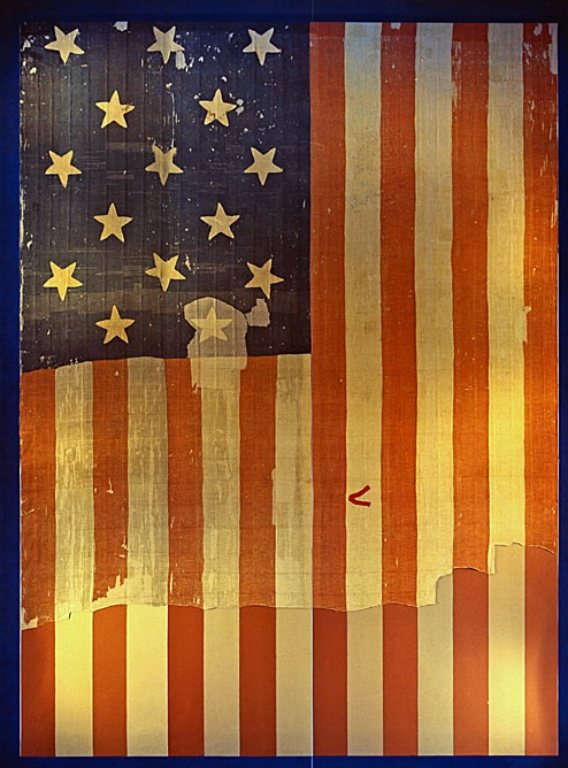 One of the most significant military artifacts now in the possession of the People of the United States is the subject of our National Anthem. The Star Spangled Banner (the flag flown over Fort McHenry during the September 5-7, 1814 British bombardment) sat in the hands of the Major George Armistead’s (the fort’s commander) family for more than 110 years (with one public display in 1880) before it was donated by his grandson to the Smithsonian Institute.

Militaria collectors are merely caretakers and stewards of history. Though we possess these artifacts, ownership is truly not our principal focus. We expend countless resources (time and finances) preserving each piece and researching the associated veteran or historical events in order to preserve the swiftly eroding and priceless history.

← Following the Flag
Fall In! Getting Back to Militaria After a Long Summer →