My memory with this Zippo hand warmer is vivid: I remember the smell of the fluid burning and how it warmed my hands on a cold winter morning.

When I was invited to write for A&E’s Collectors Quest collector’s forum as their resident militaria blogger, I knew that I had my work cut out for me. Besides possessing some basic skills with my native tongue (or at least the written word), I knew that I would have a very diverse field from which to extract topics for my columns. With nearly two years researching and writing on an aggressive deadline schedule coupled with my passion for militaria collecting, I developed a fair amount of expertise that I brought to bear when I moved on to my own blog.

From my initial post on this blog (Militaria Collecting: It Isn’t Just Fatigues and Helmets), I mentioned the diversity of the “genre” and how far reaching – extending beyond the bounds of military-specific items – the various categories would be. It is very easy to be myopic as we focus on what we enjoy, forgetting that a specific area of collecting militaria could be part of a larger field of collecting that has very little to do with the military. One of those heavily-collected areas is in the field of cigarette/cigar lighters…more specifically, Zippo lighters.

My introduction to Zippo products came when I was a pre-teen as my uncle, a World War II army combat veteran of the Pacific theater, offered to warm my hands up with a unique device…a hand warmer. Fueled by lighter fluid, the warmer took the bite out of the cold that was causing my hands to stiffen and ache. I marveled at the its soft metal-feel and the warmth it provided. I remember seeing the name emblazoned across the device’s bottom, “Zippo.” My uncle was also a pipe smoker and when he went to light up the fragrant tobacco in his pipe, I again saw the name and it stuck with me for years. My uncle told me of the reliability of the Zippo; that it could still light up in a strong wind. He mentioned that all of his buddies sought them out, often trading battlefield souvenirs for them. 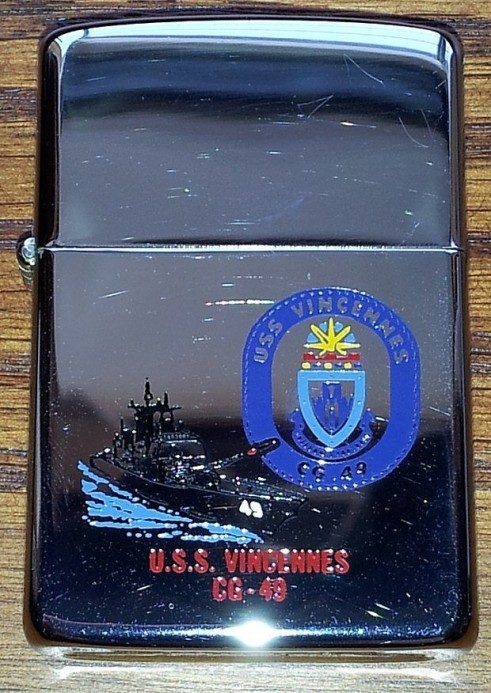 This Zippo dates from the 1980s and is the more typical chrome design with USS Vincennes CG-49 engraving.

Though I do not smoke (I never have), I own a handful of the iconic, treasured pocket flame-producing implements. All of my specific pieces are lie firmly in the military category of Zippo collecting – specifically U.S. Navy (for those of you who’ve been following my posts, this would be obvious). The depth and breadth of my collection covers all of two ships, only one of which I served aboard, and numbers somewhere in the neighborhood of five pieces, all of which are in new condition (remember, I don’t smoke). I’ve even managed to acquire, though I don’t remember how, a navy-themed Zippo pocket knife.

This is another USS Vincennes Zippo from the 1980s clad in ivory plastic and engraved with the ship’s crest.

The opposite side of the ivory plastic cladding with the ship engraving.

This is a second variety of the USS Vincennes Zippo from the 1980s clad in black plastic and engraved with the ship’s crest.

The opposite side of the black plastic cladding with the ship engraving.

Plainly and painfully obvious, I don’t possess much knowledge beyond being able to identify a lighter as being a Zippo versus a knock-off. Beyond that, I have to resort to my basic abilities of research to determine the sort of information collectors need: the age of the lighter, scarcity, desirability, condition, etcetera. One of the nice things about a company like Zippo is that they consider both their customers those who use the products and the collectors, producing quality products, standing behind them, and providing collectors with authoritative production data and information, dating back to their infancy in the 1930s.

Interested in collecting Zippo? Try some of these resources to spark your interest::

This flat Zippo pocket knife was left behind aboard my ship following one of the many parades of high-ranking naval officers who wanted to see what the (then) newest naval technological marvel could do.

For me, I will continue on in my collecting pursuits, leaving my lighter collection to remain as is – though I might have to locate a hand warmer to warm my hands and nostalgically reminisce about those days with my uncle, now long gone.

Posted in General Militaria Collecting, US Navy, Warships or Vessels