History is precious. Humanity can use history and apply its lessons to today’s situations in order to build a potential for a better future and avoid the trappings and pratfalls that were experienced by our predecessors. Aside from the knowledge that is gained by preserving historical accounts and narratives, making contact with the relics and artifacts from those bygone eras of our past can be transformative for many. Most don’t realize that there is a large percentage among society who, whether they realize it themselves or not, enjoy preserving and maintaining tangible history among their personal possessions.

Holding and touching a relic, despite its historical significance, whether it is a family heirloom or a piece that is connected to a significant event can draw a person into a mindset of desiring to understand more about the item, who it originally belonged to and what was taking place in that space in time. The quest for knowledge that an encounter with an artifact launches is impactful, if not addictive once the first discovery is unearthed (that can and often does lead to a string of revelations) leading to that individual becoming a steward of history and artifacts.

For many, preserving these pieces means that precautions need to be taken in order preserve the items their present state and condition. Stabilizing a piece that has many decades of decay and destabilization already in progress is a challenge and can be a costly endeavor. Other collectors, try to perform a measure of restoration that will set a piece into a particular state, undoing the damage of improper storage or they may be repairing what was done by treasure-seekers (removing portions from the item that were, perhaps seen as valuable) by replacing a missing element.

Prices of artifacts (when they are listed or sold) are seldom mentioned on The Veteran’s Collection in order to keep the focus on the pieces rather than the monetization of history. Also, values are relative and highly subjective from one collector to the next. A person with very deep pockets and who may not be as knowledgeable about the individual artifact, whether it is scarce, rare or fairly common may tend to employ emotions to their purchasing decision and synthetically inflate the prices for certain types of artifacts or genres of collecting. Some collectors are more focused on discovering areas of investment seeking a return on their capital outlay rather than to be a steward of history which presents increased opportunity for negative results, both for the individual and for collectors. 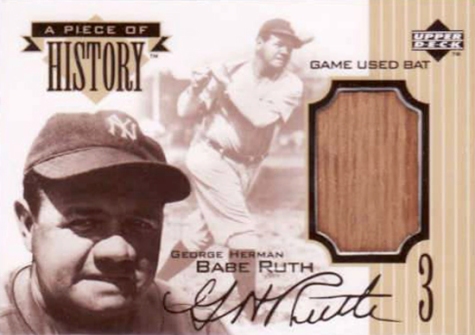 The card that launched Upper Deck’s entry into destroying rare artifacts for profit; a card with a piece of Babe Ruth’s bat from the 1920s (source: eBay Image).

The desire and perceived need to possess pieces of history are only two of the wide-ranging and numerous contributing factors motivating collectors to seek out artifacts. These two are, perhaps what some companies like Carlsbad, California’s Upper Deck Company are counting upon. Since its founding and subsequent first release of baseball cards in 1989, Upper Deck has been an innovator, turning the industry on its side beginning with the inclusion of actual autographed premium cards in its sets in the early 1990s, contributing to the company’s immediate successes. Other card companies followed suit pushing Upper Deck to seek other innovations. In 1996, Upper Deck began what still remains as a controversial move by acquiring jerseys from (then) popular stars of sports in order to cut them into pieces and affixed to premium insert cards. The direct results were increased sales as collectors sought the cards in packs, buying them by the case while others paid exorbitant prices on secondary markets. Despite the scoffs and disdain of sports collectibles at the idea of destroying historic artifacts, Upper Deck leadership decided to up the ante in 1998.

The Upper Deck premium card set featured bat pieces from other legends of the game such as Jimmie Foxx (source PSA.com).

In 1998, Upper Deck purchased a game-used, albeit cracked (by the Bambino, himself) 1920s era baseball bat for the sole purpose of cutting it into bits and distributing it on premium cards. Yes, the bat was theirs to do with as they pleased but to destroy an historic artifact for profit is certainly a justifiable reason for vocal objection by fans, historians and museum curators. While one could assert that Upper Deck did the collector market a favor by making the remaining Ruth bats more desirable and a little bit rarer, the idea that the intentional destruction of an artifact for profit is a hard pill for many to swallow. Undeterred by the negative reaction, the increased demand and furor surrounding the Ruth inserts served as an enabling of Upper Deck as they pressed further into this market, extending the pieces of the game concept across all of the sports in which they participated. Upper Deck launched other business ventures into the collectibles market apart from trading cards that included vintage and game–used memorabilia, autographs and authentication services. The practice of cutting up historical objects for profit, continued.

Folks who dabbled in the sports card industry in the 1990s are still stinging from the over-saturation of card sets (standards, mid-level, premiums with each having insert specialty offerings) rendering all but a fractional percentage of those produced with any collector interest and perceived value. Quite literally, tons of the cardboard printed in the 1990s and into the 2000s is worth only its weight in recyclability and millions of collectors are left to turn up their noses at the mere mention of sports cards from this period. In 2009, the company that “revolutionized” the industry with innovations (both good and bad) was unceremoniously ejected when their Major League Baseball license was not renewed as the long-time card company, Topps (established in 1938 as Topps Chewing Gum, Inc.) negotiated exclusive rights as the sole baseball card company. In 2010, Upper Deck lost its National Football League license as the two parties were unable to negotiate a licensing agreement. The rapid rise and descent of the Upper Deck Company as a baseball card power is quite notable. 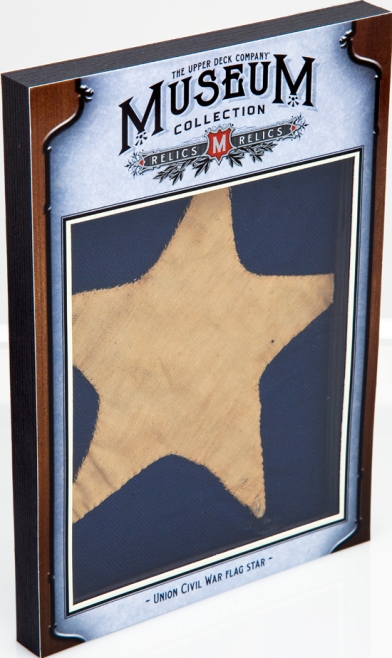 With their exit from baseball and football, Upper Deck launched (or, re-launched) the Goodwin Champions brand in an attempt to capitalize on an historic early 20th Century tobacco-card product line which opened the door to a new arena for the company (autographs of notable people from sports, history and pop-culture, dominate the sets). Venturing into other areas with this brand, Upper Deck has delved several times into the genre of selling historical artifacts or, in some cases fragments of them.

Once this American Civil War Union Flag was authenticated by a history professor, it was destroyed by Upper Deck and packaged into dozens of sealed boxes and sold (image source: Upper Deck Company).

The Upper Deck Goodwin Champions Museum Collection definitely has an appealing ring to the product line’s name – one that conjures thoughts along the lines of preservation, conservation and even public access. In this case, the brand absolutely an oxymoron as the practice of selling artifacts in this manner defies museum practices and governance. In 2014, coinciding with the outbreak of what would become known as World War I, Upper Deck began to tout their forthcoming Museum Collection product line, stating in their August 2014 blog post (titled ”Brag Photo: 2014 Goodwin Champions Museum Collection World War I Exchange Cards”), “Our brand team worked for over a year to procure amazing artifacts from battlefields and private collections for Goodwin Champions Museum Collection World War I cards. Now that they have been completed, it is incredible to see the end result.” The results are certainly incredible – incredibly offending to those who seek to preserve this history.  When one delves into the items being listed and discovers that Upper Deck once again destroyed artifacts, carving the artifacts into bits in order to fit them into heavily branded, gaudy packaging.

Two years prior, Upper Deck hired a history professor to examine their acquisitions that would soon find their way into a sets of American Civil War artifacts, “Most impressive perhaps is the center piece of the collection – a Union Flag actually flown on the field of conflict. This flag bore witness to the very personal experiences of some of the War’s participants,” claimed Upper Deck on their blog post, “Upper Deck Brings in a Professor to Review Civil War Artifacts in 2012 Goodwin Champions.” Soon after the professor’s authentication, Upper Deck destroyed the flag, cutting it into bits to package and sell.

Many collectors of militaria love to share their collections privately and publicly, taking great pains to create aesthetically pleasing displays and arrangements. Some collectors have dedicated space within their homes that feature stable environmental and lighting conditions in order to delay the decaying process while affording them the ability to share their collections with incredible contextual presentations. It is difficult to imagine seeing a collection of Upper Deck’s butchery-in-slick-packaging proudly organized and presented to admirers.

Upper Deck certainly is not the first to venture into the destruction of artifacts however they seem to be the organization that has kicked the door wide open for highly inflated prices for somewhat ordinary militaria on the secondary market.  Military collectors, especially those who specialize in specific areas will shake their heads when they see the prices listed by dealers of Upper Deck’s militaria pieces. When one can purchase a matched pair of genuine World War II period correct Eagle, Globe and Anchor (EGA) collar devices for less than $20, imagine their surprise to see an asking price of near $300 for a single EGA that is enclosed in an Upper Deck package. 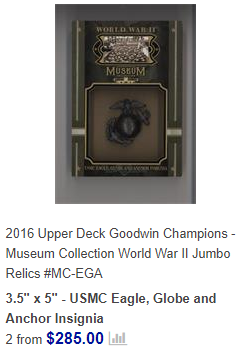 A matched pair of WWII vintage EGA devices can be had for $20-30 or one can drop $285 for a single piece wrapped up in branded packaging (image source: Com C).

A few years ago, The Veterans Collection shined a spotlight on another example of military destruction that was, at the time, performed upon donated uniform artifacts that were de-accessioned from the World War II Museum and made into wrist bands the firm, Bands for Arms.  The published “Shredding History” articles consisted of a three-part series (Shredding History or Genuine Fundraising? Part I,Shredding History Part II – Severing the History from the Artifact and Shredding History Part III – Dwindling with Time) regarding the entire process and how the destruction of uniforms was used to turn a profit (part of the proceeds is donated to various veteran-themed charities).

If companies like Upper Deck didn’t have eager audiences and willing customers, the act of destroying history would not be profitable. New and future militaria collectors would be better served by immersing themselves into the hobby by connecting with fellow collectors, attending shows and getting out local garage and estate sales in their quests for artifacts. Knowledge and a discerning eye are two of a collector’s most powerful tools that will allow them to uncover some of the most amazing historical discoveries. It is the hope of the Veteran’s Collection to be just one of the tools that collectors can utilize during their quests.