“Blue Seas, Red Stars” Details How The Soviet Union Honored Heroes of the Battle of the Atlantic 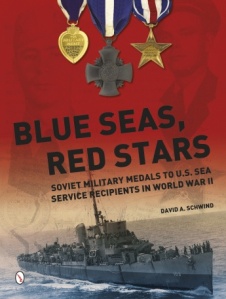 Many of the stories found within the pages of this site, while centered upon artifacts and items that once belonged to veterans – some those pieces possess researchable history that is traceable to the individual. If you’ve read any of these articles, you know that as much as is possible, I try to provide a snapshot of the military careers of the service members, inclusive of their decorations and awards they received. Acknowledging the achievements of the military member or those of the units for which they were assigned, or the campaigns these men and women participated in, while a common practice within this realm of military service, it is somewhat foreign in the civilian sector.

Medals and decorations are a common focus of militaria collectors – especially medals that are engraved (i.e. named) as valor medals typically are at the time of presentation to the service member – due to their unique and very specific historical nature.  A group of medals and ribbons that were worn by a veteran provide a visual narrative – a tangible representation of the career of a service member showing, at the very least, when and perhaps where the individual served, if he or she served in combat or was decorated for service above and beyond the norms of duty. There are many areas of focus within the sphere of collecting decorations. Some may zero in on a specific era, military branch, discipline or specialty (aviators, armor, etc.) or specific medal awardees (Navy Cross, Distinguished Service Cross or other valor medals) or those who were killed in action (Purple Heart medals awarded to those who were killed or listed as missing in action).  Though I am in possession of several decorations, I am not a collector of medals and ribbons. All that I have were either inherited (I am the steward/archivist for family history) as part of a relative’s group or were acquired as part of my restoration efforts to preserve the full story of a family member’s service.

A veteran myself, I recognize that the preservation of my own decorations is part of my responsibility to maintain the family legacy and history of service. With the exception of the decorations awarded to my father (a Vietnam combat veteran who is very much alive and well), I have been given the task of maintaining these priceless family artifacts which are inclusive of the medals and ribbons that I earned and received during my service. I couldn’t imagine seeing family history such as this falling into the hands of collectors rather than being preserved by our following generations.

It may be just my perception but it seems as though there is a steady stream of military-history books being released throughout each year with increasing frequency. With the passing of the World War II generation and their stories fading away, our nation’s interest in them, fueled by stories and films that dominated the national conscience from the mid 1990s through the middle of this decade, too has waned. The stories of the common soldiers, marines, sailors and airmen have all but been forgotten.  The attention in military stories has turned toward the more recent conflicts in the Middle East is more prevalent as the generation who fought and served in these conflicts is reaching (military) retirement age. However, there are still good stories from WWII that remaining to be told and a recent publication, though now a few years old, deserves my readers’ attention.

Prior to the December 7, 1941 attack on Pearl Harbor, the United States’ participation in WWII was in support of our European allies – predominantly Great Britain – by way of supplying materials to sustain their fight against the wave of the Third Reich that was washing over Western Europe. When Americans think about the Battle of the Atlantic, it isn’t uncommon for visions of the Allied convoys and the German U-boats operating in “wolfpacks” hunting the defenseless merchant ships come to mind. However, the overall campaign in the Atlantic Ocean was far more involved and following the United States’ declaration of war on the Axis powers, was truly a multinational alliance effort that led to the defeat of Germany. Many Americans participated in the harrowing and dangerous duties in the Atlantic in striving to support the fight in Europe. Convoy after convoy of materials, food and troops departed ports in the United States heading to destinations in Europe (England, Ireland, Russia) and in the Mediterranean faced the threat of being torpedoed by German U-boats who waited for the vulnerable ships to pass by. Shore-based anti-submarine patrols flew supporting missions from each side of the Atlantic providing air cover as far out to see as could be reached but there were still gaps of open seas that were ideal hunting grounds for the wolfpacks. 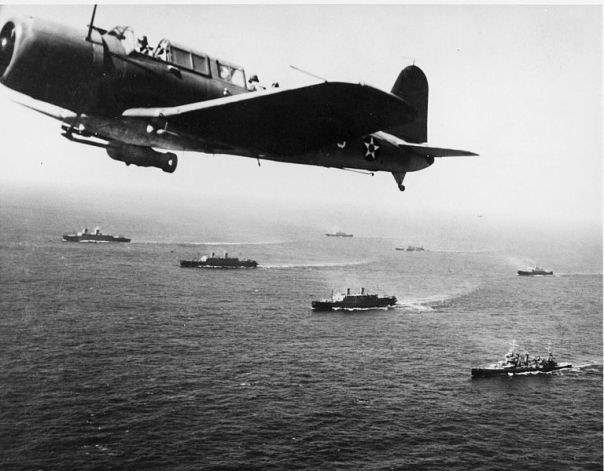 Convoy WS-12: A Vought SB2U Vindicator scout bomber from USS Ranger (CV-4) flies anti-submarine patrol over the convoy, while it was en route to Cape Town, South Africa, 27 November 1941. The convoy appears to be making a formation turn from column to line abreast. Two-stack transports in the first row are USS West Point (AP-23) — left –; USS Mount Vernon (AP-22) and USS Wakefield (AP-21). Heavy cruisers, on the right side of the first row and middle of the second, are USS Vincennes (CA-44) and USS Quincy (CA-39). Single-stack transports in the second row are USS Leonard Wood (AP-25) and USS Joseph T. Dickman (AP-26). US Navy Photo.

Convoys consisted of merchant ships, crewed by a mixture of merchant seaman, active-duty naval personnel and the US Navy Armed Guard (serving primarily as gunners, signal men and radio operators), destroyer-escorts, destroyers and, by 1943, small aircraft carriers that possessed the armament and tactics necessary to conduct anti-submarine offensive measures along with their role in providing protection for the convoys.

While there are many publications, documentaries and books that are fantastic in providing great coverage of the Battle of the Atlantic, not much exists regarding the men who served. Historian and fellow militaria collector, David Schwind spent years researching and traveling the United States in order to capture and retell the stories of American sailors who fought in the Battle of the Atlantic. The one aspect of his effort that is unique (and was a complete surprise to me) is that each man that he spotlights was recognized by the Soviet Union with some of that nation’s highest honors and decorations. In fact, nearly 220 men who served in these convoys (as part of the United States sea services: Navy, Coast Guard, and Merchant Marine) were awarded Soviet decorations of varying degrees, such as:

With the rise of Communism in conjunction with the West’s fight to stem the expansion of the Iron Curtain following WWII, many of these veterans tucked the medals away, opting not to wear them on their uniforms. In his December 2015 work, Blue Seas, Red Stars: Soviet Military Medals to U.S. Sea Service Recipients in World War II, Schwind provides individual narratives of each recipient, inclusive of their military careers and post-service lives. Along with the detailed information, he includes extensive photographs of each recipient’s Soviet medals, their presentation boxes, documentation, vintage photographs and images of the medals themselves. David Schwind’s photographic efforts in capturing the details of these incredible medals is nothing short of fantastic and perfectly compliments his extensive research. This book is not merely a compilation of veterans and their medals but rather a very personal presentation of vignettes, photographs and an extensive amount of supporting references.

The book production (by Schiffer Publishing) is first-rate with pages that are substantial and glossy, and printed in full color. The binding is stable and sturdy. Even the endpapers and are impressive with photographs of the veterans’ award cards. After nearly two years of use, my copy of Blue Seas, Red Stars looks like new though I have been through it, cover to cover multiple times and it shows none of the typical signs of use in many books of this size. Speaking of size, Blue Seas’ dimensions are consistent with those of many coffee-table books (9″ x 12″ x 1″) but is far from just a collection of nice pictures.  The men who received these Soviet awards were truly heroes and they were so recognized by our WWII ally for their deeds and service above and beyond the call of duty. Many of the heroes in this book will be recognizable to many contemporary navy veterans and history buffs as their names have been affixed to transoms of a few notable combatant naval vessels.

Perhaps the most noteworthy fact of Schwind’s brilliant production is that the of the 217 Soviet medals that were awarded to American sea-service personnel, a significant number of these decorations remain with the veterans’ families and are treasured for their future generations and that more than 100 of the families participated in this project, partnering with the author and granting him access to handle and photo-document these treasures for his book.

The photography reveals the details of the individuals’ awards and decorations along with other service-related pieces that breathe life into the narratives of each veteran. 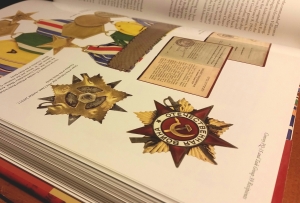 The book is printed on beautiful heavy-stock coated paper which provides a wonderful measure of clarity to the text and helps the colors of the awards to leap from the pages.

It is my hope (especially within the capacity of my responsibility) that other families make the decision to preserve and maintain their family’s legacy and keep these precious awards to be handed down throughout their generations. However, if these pieces are divested, I hope that collectors will make every effort to assume the mantle of historian and continue the legacy where the family left off.

Blue Seas, Red Stars is a great addition to anyone’s library, whether they are a military or naval historian, militaria collector or simply interested in in the little-known relationship between WWII veterans and the Soviet Union’s gratitude bestowed upon them for their service during the war.