A Piece of Naval History or Just Macabre?

“The future naval officers, who live within these walls, will find in the career of the man whose life we this day celebrate, not merely a subject for admiration and respect, but an object lesson to be taken into their innermost hearts. . . . Every officer . . . should feel in each fiber of his being an eager desire to emulate the energy, the professional capacity, the indomitable determination and dauntless scorn of death which marked John Paul Jones above all his fellows.” President Roosevelt uttered these words (on April 24, 1906) within the confines of the United States Naval Academy at the re-interment of the of remains of the man who is known today as the father of the US Navy, Captain John Paul Jones.

Framing an artifact with historical context helps me (and hopefully readers of The Veteran’s Collection) to better understand the importance of an object or artifact. Rather than dive straight into an item, I find that setting the stage helps to provide perspective, so please bear with me.

As a militaria collector whose primary interest lies in US Navy artifacts, the idea of possessing anything from the Continental Navy is an aspiration that is almost too lofty to consider. The sheer scarcity of objects precludes ordinary collectors like me from pretense of forays into the Revolutionary-era collecting. Seeking out musket balls and powder horns from the Continental Army is one thing, but the minuscule number of patriot participants in the naval service (in comparison to that of the ground soldiers) equates to an incredibly limited volume of available artifacts for collectors.

Considering my financial position and the reality that just about any piece (that I would contemplate as being worthy of my interest) from the Revolutionary War is well out of my reach helps to keep me focused on artifacts that are both within my area of focus and budget constraints. However, on occasion, I do find myself wandering about through dealers’ internet sites and online auction listings from the 1775-1783 time-frame. Very seldom do I find anything that captures my attention which is something that happened not too long ago. 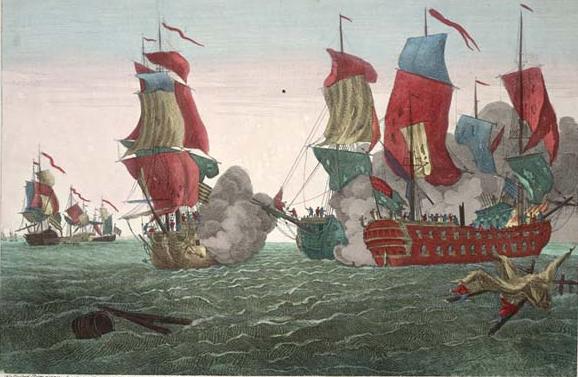 Engraving of the famous sea-battle involving John Paul Jones based on the painting “Action Between the Serapis and Bonhomme Richard” by Richard Paton (published 1780).

In school, we learned about the famous exploits of Captain Jones (born John Paul in Scotland in 1747, he added the surname Jones after emigrating to the Virginia Colony in the 1770s) with the notable sea battles between his ships and those of the Royal Navy. His legendary response to the surrender inquiry (“Has your ship struck?”) by the enemy commander of the HMS Serapis (Captain Richard Pearson), “I have not yet begun to fight!” will forever be cited in U.S. Naval lore. But most American school children are not educated on what became of Jones following his war service and his ultimate untimely demise.

Following the 1783 signing of the Treaty of Paris that brought about peace between Great Britain and the newly established United States, the need for maintaining a navy was lost on (most) congressional members. By 1785, the Continental Navy was disbanded and the last ship (Alliance) was sold off. Jones found himself in Europe (assigned to collect prize money on behalf of Continental Navy privateer sailors) without a command. After a short stint serving Empress Catherine II of Russia as an admiral in the Russian navy (along with some controversial legal troubles), John Paul Jones retired to Paris at the ripe old age of 45 in 1790. Two years later, the great Revolutionary War captain was found dead in his Paris apartment having succumbed to interstitial nephritis.

Jones was buried in the French royal family’s cemetery (Saint Louis Cemetery) with considerable expense to M. Pierre François Simonneau, who was incensed that the American government wouldn’t render the honors due such a national hero at his passing. Simonneau said that if America “would not pay the expense of a public burial for a man who had rendered such signal services to France and America” he would pay (the large sum of 462 Francs) himself.

With the collapse of the Louis XVI’s monarchy soon after Jones’ death and burial, the cemetery was sold and after a few years was largely forgotten. Decades passed and John Paul Jones’ grave was lost to decay and years of neglect.

In 1897, General Horace Porter was appointed as U.S. Ambassador to France by President McKinley. Soon after his arrival in Paris, Porter took personal interest in the pursuit of Jones grave while gathering official and private documents (much of it was conflicting) pertaining to his death and burial.

“After having studied the manner and place of his burial and contemplated the circumstances connected with the strange neglect of his grave, one could not help feeling pained beyond expression and overcome by a sense of profound mortification. Here was presented the spectacle of a hero whose fame once covered two continents and whose name is still an inspiration to a world-famed navy, lying for more than a century in a forgotten grave like an obscure outcast, relegated to oblivion in a squalid corner of a distant foreign city, buried in ground once consecrated, but since desecrated by having been used at times as a garden, with the moldering bodies of the dead fertilizing its market vegetables, by having been covered later by a common dump pile, where dogs and horses had been buried, and the soil was still soaked with polluted waters from undrained laundries; and as a culmination of degradation, by having been occupied by a contractor for removing night-soil.”

After years of research, Porter was confident that he had narrowed down the approximate grave site location. In 1905, excavation work commenced as archaeologists began digging beneath a building that had been constructed over the cemetery. Upon unearthing a third coffin (they knew that Jones had been buried in a costly lead casket), the men opened it and found a well-preserved body that matched all the details of the man they sought. Porter wrote, “For the purpose of submitting the body to a thorough scientific examination by competent experts for the purpose of complete identification, it was taken quietly at night, on April 8, to the Paris School of Medicine (École de Médecine) and placed in the hands of the well-known professors of anthropology, Doctor Capitan and Doctor G. Papillault and their associates, who had been highly recommended as the most accomplished scientists and most experienced experts that could be selected for a service of this kind. I of course knew these eminent professors by reputation, but I had never met them.”

Still inside the dig site, workers pose with lead casket of what was believed to be the body of John Paul Jones.

John Paul Jones in 1905. This is an official autopsy photograph taken of John Paul Jones’ corpse. Photo courtesy of the U.S. Naval Academy

After careful examination, the physicians confirmed the identity (of the remains) as being that of the late Captain Jones. By August of 1905, the lead casket (which was placed inside a wooden casket) had arrived in the U.S. and was temporarily laid to rest at the US Naval Academy’s (USNA) Bancroft Hall during an April 24, 1906 ceremony. Jones’ body remained in this location while his final resting place was constructed beneath the USNA chapel. Upon completion of the elaborate and ornate crypt in 1913, the naval hero of the American Revolution was laid to rest at his final location.

Casket of John Paul Jones is lowered to the deck of the USS Standish (U.S. Naval Historical Center Photograph.).

Casket containing the body of John Paul Jones on the after deck of the Tug Standish, after its transfer from USS Brooklyn (Armored Cruiser # 3) in Annapolis Roads, off the U.S. Naval Academy, 23 July 1905. An honor guard stands around the flag-draped casket (U.S. Naval Historical Center Photograph.).

By now you might be wondering why I am going to such great length in describing what happened with the naval hero of the American Revolution and what the possible context is regarding militaria. While perusing an online auction site, I stumbled upon a listing pertaining to Captain Jones.

As I scanned through the various images detailing the different facets included with the piece it began to sink in that the auction lot was highly bizarre and extremely unique (if not macabre). Though seller made a minute attempt to fully describe what the item within the listing, he (or she) opted instead to let the incredibly small images (low resolution, no less) makeup for the lack of details within the text.

The rather large framed John Paul Jones group has the lock of his hair prominently displayed among the provenance and images (source: eBay image).

From appearances, the lot contained a lock of the Captain’s hair that had supposedly been removed by one of the physicians who performed the 1905 post-exhumation autopsy. Accompanying the lock (which was bound with a ribbon) was the doctor’s hand-written note regarding how he obtained the piece. Along with these two pieces is another handwritten note inscribed by the man who purchased the hair (“H. H. Strigley”) from the physician in January, 1926.

“Lock of hair of John Paul Jones, founder of the United States Navy. Taken by Dr. Georges Papillault during the autopsy on the remains of Jones. Paris, France 1905” (source: eBay image).

While this listing certainly piqued my interest, I’d shudder at the idea of forking over $3,500 (which I don’t happen to have available) without performing the necessary due diligence in verifying the documentation trail (or maybe a DNA test of the hair would be in order?). Taken at face value, the item would be a fantastic acquisition and quite the conversation piece for naval collectors.

Preserved within the frame is the note from the original purchaser with his signature and the date (source: eBay image).

Showing the orientation of the lock of hair, the original purchaser’s provenance note and the vintage postcard of Jones’ Naval Academy crypt (source: eBay image).

The handwritten note from Dr. Georges Papillault, Assistant Director of the Laboratory of the Ecole des Hautes Etudes, professor in the school of anthropology (source: eBay image).

Contextualizing the group are two images of John Paul Jones. One, an illustration of him during his naval service and the other, a photograph taken after exhumation, during his examination (source: eBay image).

Also framed with the group is a vintage postcard of Jones’ crypt at the Naval Academy (source: eBay image).

On the back of the John Paul Jones framed group is an attached envelope of supporting documents (source: eBay image).

While there is reason to question the validity of such an item, to the right collector, this John Paul Jones group would make a great investment. Perhaps the provenance documents are traceable and can establish enough proof (a hand-writing analysis of the note purportedly drafted by Dr. Papillault)?