No Campaigning Here: Badges for Military Service Members in the White House

As our nation draws nearer to Inauguration Day on January 20, 2017 we are settling down from an election cycle that saw voters increasingly blasted with political advertisements on television and radio along with the landscape being polluted with the signs of candidates from local, state and federal elections. Now that the streets and neighborhood landscape has been cleared of all the pro- or anti-candidate signs with only the die-hard, disillusioned still driving their cars   with bumper stickers from their failed candidates, hoping to wake up to a different outcome. The time of year that I loathe the most has come to an end.

As much as I have disdain for that season, there is a segment of collectors who thrive on the materials that are produced to grab the undecided voters’ attention and sway them to cast votes in the candidate’s favor. Does it work? That is a subject of much debate, but the materials created can be a treasure trove for collectors, especially when it comes to candidates for the office of the President of the United States.

As the above election items are clearly NOT my forte, there are some militaria pieces that hold my interest. Though they are connected to our nation’s highest office, these uniform accouterments have nothing to do with any individual president.

On June 1, 1960, President Dwight D. Eisenhower signed Executive Order 10879 establishing the Presidential Service Badge or PSB (and the associated Presidential Service Certificate). Prior to the issuance of the PSB, U.S. military personnel assigned duty at the White House offices including…

…were issued the White House Service Badge (WHSB). The design of this badge incorporated a gold-colored medallion with a field of white with the eagle of the presidential seal superimposed over the center. 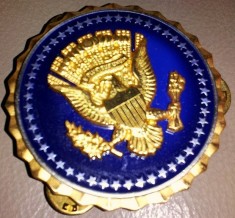 There is no arguing that this is one of the most beautifully designed U.S. military badges and it is a pleasure to have one in my collection.

Superseding the WHSB in 1964 was the Presidential Service Badge. The badge was a slight departure from the WHSB, changing the field from white to blue and adding a ring of white, 5-pointed stars around the field’s inner circumference. Each PSB is individually and uniquely numbered. Each number is associated to the person to whom that individual badge was issued, making each one trackable. The PSBs come with a three-prong clutch-back to affix it to the wearers’ left breast pocket.

In addition to the staff assignments listed above (for the White House Service Badge), military aides who carry the “Football” and White House military public affairs officers.

Vice Presidential aides, like those serving the President, are also issued a badge that is nearly identical to the defunct White House Service Badge with the difference being a gold (versus silver) colored seal as well as a variation with the gold edge thickness and design.

This Presidential Service Badge is still sealed in the plastic in the original government-issued, no frills box. I am half-tempted to open the package to see the serial number.

The reverse side of the badge shows the clutchback prongs and clutches and the (obscured) serial number.

Much more understated than the PSB, the Vice Presidential Service Badge is more similar to the original (obsolete) White House Service Badge.

Just as awarded medals and ribbons, both the Presidential and Vice Presidential Service Badges remain a permanent part of the service members’ uniforms for the remainder of their military careers, even after their duty with the elected officials has been fulfilled.

These badges are fantastic additions to collectors of both militaria and presidential items.

Posted in Decorations, Awards and Badges, Insignia and Devices