Remaining focused with collecting can be a challenge, especially when it comes to militaria. If you are a die-hard fan of military history, it becomes quite difficult to keep composed when unique pieces of history become available. However, when one of those unique items surface that actually does directly tie-in to one’s principal areas of collecting, it cannot be passed up.

During the first four of my ten years of naval service, I was blessed to be assigned to the pre-commissioning crew of the U.S. Navy’s newest (at that time) cruiser – the first to be assigned to the Pacific Fleet – the USS Vincennes. My assignment was handed to me as I was graduating from my naval training school and, at that time, I had no idea of the history of the name of that ship. It was a name that I struggled to pronounce correctly. 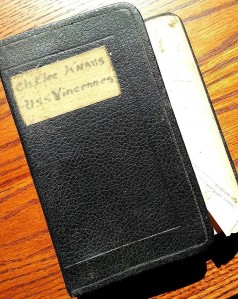 This binder is labeled with the name of the owner (Chief Electrician Knaus) for the USS Vincennes. It was used during the ship’s overhaul in 1939. I still need to research Chief Knaus to see if I can locate any details of his service.

Upon reporting in to the command located in San Diego, where the ship was to be homeported upon completion, I was quickly immersed into the history of the ship’s name and bowled over by the sheer excitement and passion for the legacy of the citizens of the Indiana city from where the ship drew her name. I was also immediately connected to a 500-member-strong group of World War II veterans (who had served aboard either of the two WWI cruisers that also bore the name), all of which had incredible pride for this ship. These men and their wives had played a significant role in convincing the navy leadership to name the third ship of the Ticonderoga class cruisers to honor three previous front-line navy warships that had also carried the name Vincennes.

Since the mid-1980s, I’ve been immensely interested in anything pertaining to the three previous USS Vincennes warships. I’ve collected press photos, news articles, first day postal covers and other ephemera that are somehow connected to the ships. Seldom have I seen items with more direct significance than something that actually came from the ships as preserving the history during their service was neither a thought, or in the case of the CA-44 – which was sunk by the Japanese at Savo Island on August 9, 1942— possible. A few months ago, an interesting piece surfaced that had historical significance and direct ties to the CA-44. More than likely, it was aboard the ship as part of a daily routine. While it isn’t anything that is correlated to a battle or naval engagement, the importance of this piece did provide some ancillary historical details regarding the configuration changes made to the weapons and other shipboard systems.

This work order specifies changes made to the 5″ – 25 caliber anti-aircraft guns’ electrical system.

The Vincennes’ main battery was comprised of three triple turrets, each with 8″ – 55 caliber guns. This work order details changes to the emergency hatches.

This slip documents changes to the ship’s signal lights – the tools of the trade for the signalmen.

Listed on an online auction site was, at least for me, was the holy grail. It is a binder containing work orders for electrical jobs during an overhaul period in 1939. Contained within are forms and handwritten work orders specifying upgrades and configuration changes made to the ships electrical systems. Some work orders detail modernization of weapons systems that would meet the changes to the geopolitical landscape and the escalation of war in Europe and Asia.

I was fortunate that my bid was high enough to beat out others but was still in line with my budgetary limitations.

The binder provides me with a fantastic vantage point as I continue to document the history of these great warships and is a great addition to my tiny Vincennes collection.

Posted in Ephemera and Photographs, US Navy, Warships or Vessels, World War II