“Bluestar. Put all your clients in it” 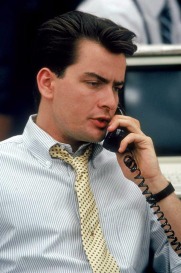 One thing I am sure of, I am glad that I don’t have to compete against the likes of Gordon Gecko (or Bud Fox’s insider trading) when it comes to purchasing militaria. But something about this blue star interests me.

While the film, Wall Street was a blockbuster hit in the late 1980s it certainly isn’t the subject of this article. As I sought to reconstruct the decorations that were awarded to my uncle, a 30-year navy veteran who served from 1932 to 1962, I spent a fair amount of effort for accuracy not only in the awards but also with the period-correct specificity. One such award, when it was instituted was slightly different from what it is today.

With the signing of Executive Order 9050 on February 9, 1942, President Franklin Delano Roosevelt approved one of the most recognizable and most-senior (in order of precedence)  unit awards for the United States Navy and Marine Corps, the Presidential Unit Citation (PUC). The initial criteria for this award read:

“The Secretary of the Navy is hereby authorized and directed to issue a citation in the name of the President of the United States, as public evidence of deserved honor and distinction, to any ship, aircraft, or other Naval Unit and to any Marine Corps aircraft, detachment, or higher unit, for outstanding performance in action on or after October 16, 1941.”

Just twenty days later, President Roosevelt extended a branch-specific version of the award to be available for the United States Army (Executive Order 9075).

This Marine was awarded but a Navy Presidential Unit Citation and Navy Unit Commendation NUC). A star on the NUC denotes a second award however this one is oddly a PUC blue star (image source: U.S. Militaria Forum).

Both forms of the PUC were created as ribbon-only devices (meaning that there is no associated medal pendant), intended to be presented to a unit that distinguished (Merriam-Webster defines this as “marked by eminence, distinction, or excellence”) itself in combat against an enemy. Though this criteria would be further defined in 1957 by President Eisenhower’s Executive Order 10694, the awarding of these ribbons remains limited with very few units receiving the distinction since World War II.

A custom, fully-embroidered ribbon rack that was made after the Korean War was worn by an aviator features a blue star on the PUC (image source: U.S. Militaria Forum).

When the Navy’s award was initially instituted in 1942, it was done so with a unique appliance added to the ribbon. With most Navy and Marine Corps decorations, a star is representative of additional awards received. A single bronze star device added to a ribbon indicates that the wearer received the award twice while a silver star affixed would show five of the same award. In the case of the Navy’s PUC, when it was initially presented to the personnel of the decorated unit, it was done so with a single blue-enameled star device. Subsequent awarding procedure then followed protocol by affixing additional blue stars, departing from the standard procedure for other ribbon decorations.

My Uncle s award letter for the Presidential Unit Citation ribbon shows the specific mention of the blue star.

These examples of the Army Presidential Unit Citation demonstrate the differences between the two. The Army’s version features a blue ribbon with a gold metal frame. Subsequent awards are denoted with an oakleaf device (source: eBay image).

Collectors understand that it is typical for scarce, exceptional items to be highly pursued and the Navy PUC ribbon with the blue enameled star falls right in line. For the last two years, I’ve been seeking to complete a ribbon “rack” for my uncle’s display with this early variant of the Presidential Unit Citation ribbon. During that span of time, I have only seen one ribbon and star listed at auction. As I watched for my moment to bid on the ribbon, the price exceeded my threshold three days before the close, ending up  more surpassing my budget fivefold.

Something tells me that Charlie Sheen’s Wall Street character, Bud Fox wasn’t referring to this wonderfully scarce ribbon device in his efforts to burn Gecko.