A British Collector of the Alamo – Foreign Collectors of American Militaria

A question was recently posed by militaria collector from the UK asking how Americans feel “about important artifacts which are part of US cultural history being in the private collection of a British musician.” The question was in direct response to a March 2012 publication of a 416 page volume, The Alamo and Beyond: A Collector’s Journey, that details musician Phil Collins’ extensive collection of historic artifacts directly related to the 1836 battle at the Mission San Antonio de Valero in San Antonio, Texas, simply known as the Alamo.

Published in March of 2012, Phil Collins’ book documents his extensive collection of militaria related to the 1836 battle at the Alamo.

Like many American kids of the post-World War II generation, I’ve always related the Alamo to Hollywood-produced entertainment such as Disney’s Davy Crockett (1954-55) and The Alamo(1960), glamorizing the historical characters such as David “Davy” Crockett (played by Fess Parker or John Wayne) and James “Jim” Bowie (Kenneth Tobey or Richard Widmark) and their legendary fight with Antonio López de Santa Anna and the Mexican Army. Glorified in these portrayals are the manner in which each of the two main characters fought and ultimately died alongside their comrades. American youth would be inspired to don faux coonskin caps and buckskin outfits as they act out the scenes.

Singer, songwriter and drummer Phil Collins (of rock band Genesis) was one of those kids growing up watching the onscreen portrayals of Davy Crockett. Fascinated by the Alamo and the siege and battle that took place there in February and March of 1836, Collins was drawn to collecting militaria when he discovered a Crockett autograph for sale while on tour with Genesis, “I didn’t know this stuff was out there, that you could own it,” he noted. Phil had been bitten by the militaria collecting bug and the resulting, spectacular Alamo-specific collection that he spent decades assembling is unequaled.

In March of 2012, Collins diverted from his musical creativity and ventured into writing about his militaria passion. He published his first book, The Alamo and Beyond: A Collector’s Journey which is packed with hundreds of pages of beautiful photography and illustrations documenting the depth and breadth of his collection. Though his book is listed for $120, it can be found for less than $40.

Regarding the question that was posed at the beginning of this post, my response is that there exist monuments, buildings, graves and other large, tangible items and places to view and visit that are related to this historic, tragic event in our history. The individual artifacts such as in the collection of Mr. Collins have been in private collections and out of view of the general public all along. There are probably thousands of individual pieces remaining in private collections that are or can be connected to this event and are still unviewable by the general public. 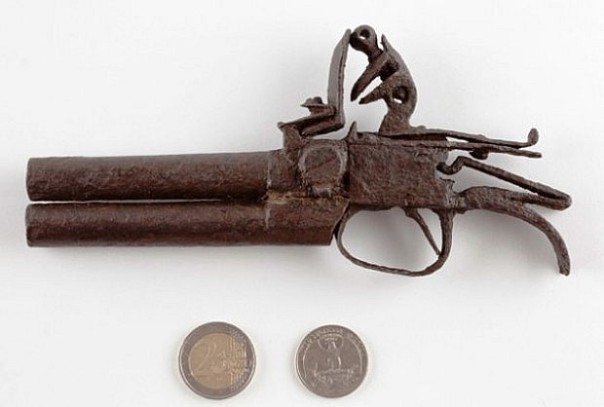 From Collins’ collection, this 1830 over and under flintlock pistol was excavated by at the Alamo site by a construction worker (source: Phil Collins collection).

I see what Phil Collins has done in publishing his book as an act of sharing treasures that have never previously been made available to the public. While the book has (for me, at least) a considerable price tag, I still see this work as a gift to fans of history. Through his efforts, we get to have something tangible that provides us with a look at a slew of items that probably wouldn’t have been assembled together without Phil’s decades of effort.

I applaud his interest in American history, militaria collecting, the Alamo collection and his work on this book.