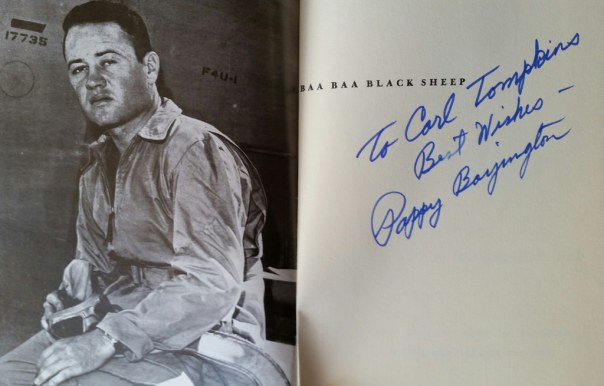 One of my favorite Medal of Honor recipient autographs is this one from Colonel Gregory “Pappy” Boyington.

For the current 2017 Major League Baseball season, twenty four players will earn $21,000,000 or more to play the game. Of those, two pitchers; David Price, Boston Red Sox and Clayton Kershaw, Los Angeles Dodgers will earn $30m and $33m (respectively) to collect “outs” for their teams throughout the season (and post-season).

Being the huge baseball fan that I am, I do understand that the MLB season is gruelingly long at 162 games and half of them are on the road, visiting cities stretching across the United States and into Toronto, Ontario, Canada. Life on the road is difficult and has considerable impact on family life with all the time away. While the season typically starts in late March to early April, for the players, it actually begins in February with spring training. If the team makes it to postseason play, that means they are working from mid-February to late October.

Many athletes’ families do not live in the city in which they are playing, further adding to the separation challenges. Players routinely miss out on birthdays, anniversaries and other family gatherings. For roughly eight months of the year, these athletes are subjected to air travel (some aboard chartered team jets) and the nicest hotel rooms. While on road trips, team equipment managers pack and unpack their gear, ensure that their baggage is in their hotel rooms when they arrive and picked up when they depart the various cities. 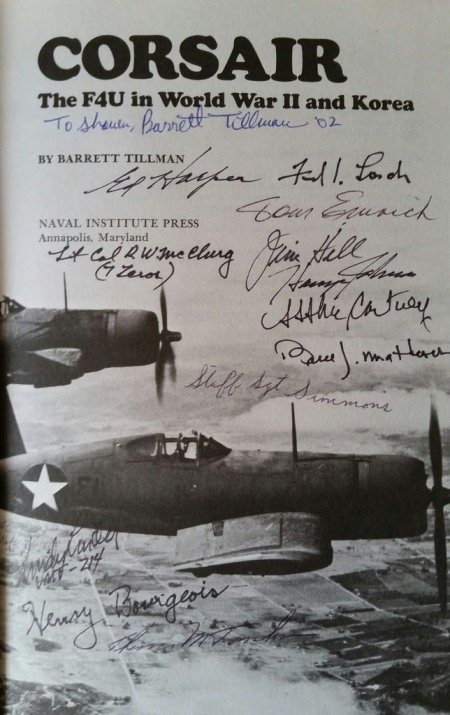 Meeting 12 of the surviving members of the Blacksheep of VMF-214 was a thrill for me. Ace, Lt. Colonel (Pappy Boyington’s wingman) was quite amusing as he and his wife “attempted” to steal my baby daughter, snickering and laughing as he wheeled her stroller away. All that I had to get signed was this book by notable author, Barrett Tillman.

During batting practice and pre-game warm-ups, fans arrive early for the chance at obtaining the autograph of their favorite players on a baseball card, ball or scorecard. Autograph hounds seek out the stars of the game to get as many items signed as possible, even hiring kids to obtain as many signatures of the game’s elite players as possible. Autographs of the stars command premium prices when sold on the market. Many of the stars understand this part of the business (yes, the game of baseball is a business) and choose only to sign at arranged events where they are paid fees, commanding thousands of dollars, further padding their multi-million dollar salaries.

By now, you are asking yourself, “what does this have to do with militaria or military collecting?” I ask that you give me a little latitude as I am getting to the heart of the subject.

As a member of the local aviation museum (which is one of the best in the nation), I occasionally attend functions that typically focus on the stars of military aviation. During these events, one or more figures make appearances where they interact with the audience, detailing or describing their escapades in aerial combat or flight operations in support of significant military historical events. The schedule typically follows the format of a presentation in the auditorium, followed by a question and answer session, then an opportunity for the “fans” to get an autograph.

A few of my crossover autographs are on baseballs. Major League Hall of Fame outfielder for the Brooklyn Dodgers, Edwin “Duke” Snider served in the Pacific Theater as a Navy fireman 1/c aboard a ship. In addition to shipboard service, he played on his ship’s baseball team when they reached friendly ports.

Navy Gunnersmate Chief, Bob Feller was a star pitcher for the Cleveland Indians for five years before enlisting into the Navy on December 8, 1941. Feller served both at the Naval training station in Great Lakes, IL and saw combat while serving aboard the battleship, USS Alabama. He was elected to baseball’s Hall of Fame in 1962.

Harold “Pee Wee” Reese was an All-Star with the Brooklyn Dodgers when he enlisted into the Navy after the 1942 season and spent most of the war serving with Sea Bees in the Pacific, playing for and coaching Navy and USMC ball teams before finishing his Hall of Fame career with the Dodgers, in 1958.

Since I’ve been a member, I have had the opportunity to meet legendary veterans that were significant participants, authors of events that had considerable impact on the outcome of the war. From Marine Corps pilots of the Black Sheep squadron (VMF-214), “sled” (SR-71 Blackbird) drivers, Tuskegee Airmen, and countless Aces from WWII, the Korean and Vietnam wars. The roster of historical figures is nothing short of impressive. While the queue of autograph seekers isn’t small at these events, it pales in comparison to those seeking signatures of the multi-million dollar ballplayers. 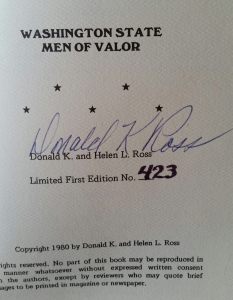 Captain Donald K. Ross, Medal of Honor recipient (for his actions aboard USS Nevada on December 7, 1941) wrote this book about MoH recipients with ties to Ross’ adopted home state.

Is it fair to compare the two? I think it is when we consider the cost of service to our country, especially when one is deployed to a combat zone. The tour of duty isn’t limited to an eight-month season. The training is far more intense and exceedingly more difficult. While batting practice may have its risks (getting hit by a pitch or taking a foul off the foot or leg), ball players aren’t psychologically preparing to protect their own lives or that of their teammates.

Deployments are a far cry from the road trips of their Major League counterparts. Some are cooped up in cramped quarters aboard ship, have to sleep in fox holes, or seek shelter beneath a truck in the desert. Current soldiers, sailors and airmen can spend up to 16 months away from family with occasional access to phones or email for a momentary taste of home. During World War Two, some were in theater for years, on the front lines for months at a time with brief respites mixed in. Mail from home was only an occasional luxury, if at all.

The risks ball players face each time they step out onto the field are real – torn ACL (anterior cruciate ligament ), rotator cuff tears, elbow ligament damage and in some rare cases, the risk of traumatic brain injury (TBI) from a wild pitch to the head. When compared to what our service men and women face – such as being shot; losing limbs, eyesight or hearing; and death – the multi millionaire athletes’ reality takes a significant backseat. 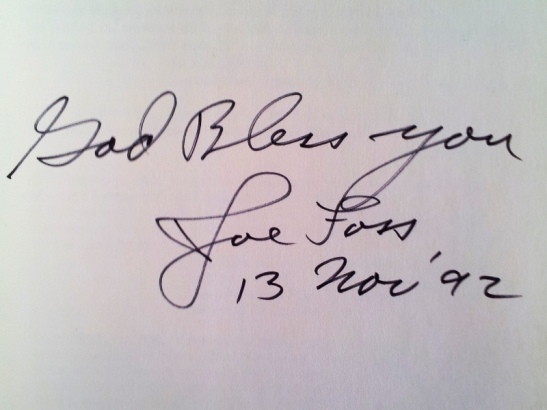 Another Marine Corps ace and Medal of Honor recipient, Major Joe Foss’ signature in his autobiography is a treasured addition to my collection.

Readers might suggest that my comparisons are patently unfair. My response is that the comparison is meant to provide focus on how we the collectors, place value and emphasis on athletes (and actors, musicians, etc.) over those who have sacrificed so much more. While in the area of autograph collecting, signatures from well-known veterans often command high prices on the resale market, lesser known vets or common military personalities get no attention. 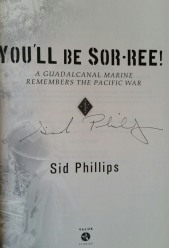 Though he didn’t earn a valor medal for his service in the USMC during WWII, his personal accounts (told in both Ken Burns’ “The War” and Tom Hanks’ “The Pacific” television series) were remarkable. I was happy to receive his signed WWII memoir.

I used to obtain and collect signatures of ball players and amassed quite a collection. Unfortunately, most of the signatures were from prospects who never truly panned out, rendering the collection to more of a humble status in its value. I did manage to obtain some choice stars and hall of fame players. But to me, these pale in comparison to the other more significant inscriptions that I have obtained since I started focusing on veterans.

I doubt that most of the signatures have much in the way of monetary value to autograph collectors, but to me, they are priceless mementos of personal encounters with men who have “been there.” My collection contains autographs from 32 Medal of Honor recipients, two World War II Marine Corps Aces, several WWII, Korean and Vietnam war Navy Cross recipients, several silver star recipients, many prisoners of war and members of the famed “Easy” company (Band of Brothers) veterans and many more.

The personal sacrifices made by these men easily overshadow any significant achievement or career milestone attained by the greatest Hall of Fame baseball player…unless that player also happens to be a combat veteran (my collection contains a few of those signatures as well). 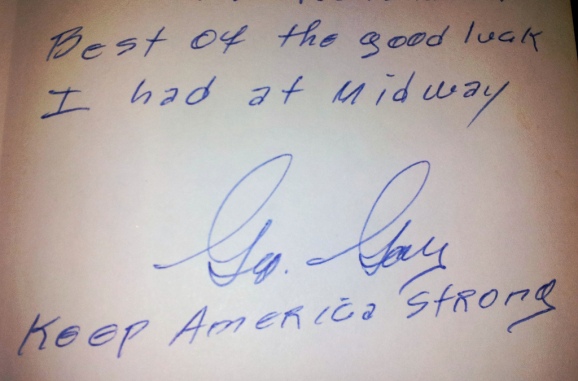 Navy Lieutenant Commander George Gay signed his autobiography in 1982. LCDR Gay was awarded his Navy Cross medal for his squadron’s torpedo dive bomber attack on the Japanese carrier, Kaga. He was the only member of his squadron to survive the attack (all were shot down, including Gay).

I didn’t intend for this posting to be a rant against ballplayers or those who enjoy collecting their autographs. My goal was purely to call attention to the value of those who willingly raise their right hand, swearing to protect this nation from all enemies, foreign and domestic and then proceed to do that very thing. Serving in the military tends to be a very thankless job and when the service member finally hangs up their uniform, there are no invites to attend any All Star weekends for autograph signing sessions.

I surrender my soapbox.