I doubt there are many collectors who have NOT experienced the current run that I’ve been on, though I certainly feel alone in this rut.

This khaki aviator’s ball cap is an oddity with this artwork on the bill. A sewn-on rank insignia adorns the front panel (source: eBay Image).

Over the past several months, I have been seeing some amazing online auction listings of seldom-seen militaria pieces. It seems that with each week that passes, an item gets listed that falls into one of my many robot-searches, alerting me to investigate and research the piece. After the necessary due diligence, I am reeled-in and decide what I can afford and get set to place my highest bid (yes, I use a sniping program). After a few days of waiting, I receive the dreaded notice that I had been outbid milliseconds after mine was placed. 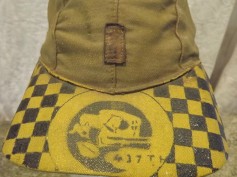 A close-up of the hand-painted bill shows the “437th” in the squadron insignia (source: eBay Image).

Aside from the disappointment of being outbid, the other all-too-familiar letdown that I have been experiencing is the discovery of pieces that would fit perfectly into my collection but the price never seems to align well with my budget. Illustrating this point was when a stunning World War II-vintage aviator’s ball cap, complete with hand-painted squadron artwork was listed at auction.

When I first laid eyes on the khaki ball cap, I was immediately captivated by the hand painted checkerboard pattern surrounding the squadron insignia. Though the design was monochromatic, the design appeared amazingly crisp overlaying the painted-yellow background. My interests lie predominantly with naval history so my expertise is lacking with regards to knowledge of Air Corps squadrons. The “437th inscribed within the insignia was very difficult to research with investigative results being sketchy at that time. Since then, I was able to research further that the hat could most likely have come from an airman who served with the 437th Fighter Squadron (of the 414th Fighter Group) that flew P-47 Thunderbolts in protection of B-29s in the Pacific Theater (in the 20th Air Force).

The cap appears to be a correct-vintage with the leather sweatband (source: eBay Image).

In this undated WWII photo of the Tuskegee Airmen, notice the aviator ball cap worn by some of the men. 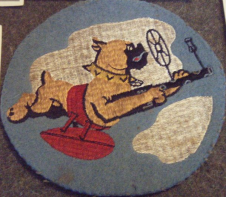 I have only found one single reference to the insignia that is painted onto the ballcap’s bill. It is taken from the unit’s squadron patch. This patch was part of a small group that included a photo and sold at auction for nearly $720.00 in 2014. (source: eBay image).

With no experience in these caps, I had no idea of the range of value for this cap. The one thing that put me off a bit was the initial bid price of $750. On one hand, it seemed to fit my perception of value, but without ironclad provenance (it had none) or any way to confirm the squadron identity, the price started to seem quite high. Too many questions coupled with the lack of sound seller-history, I couldn’t begin to ponder placing a bid even at half the asking price.

Since I first saw the cap, the seller has (unsuccessfully) listed the cap for auction a second time with a lower price. With being listed twice and not a single bid, one could infer that the cap isn’t worth the risk. But something in me keeps me guessing and wondering.

Perhaps I’ll just wait for the next amazing listing to pass on (or be passed on).