Reaching the Pinnacle of Militaria Collecting 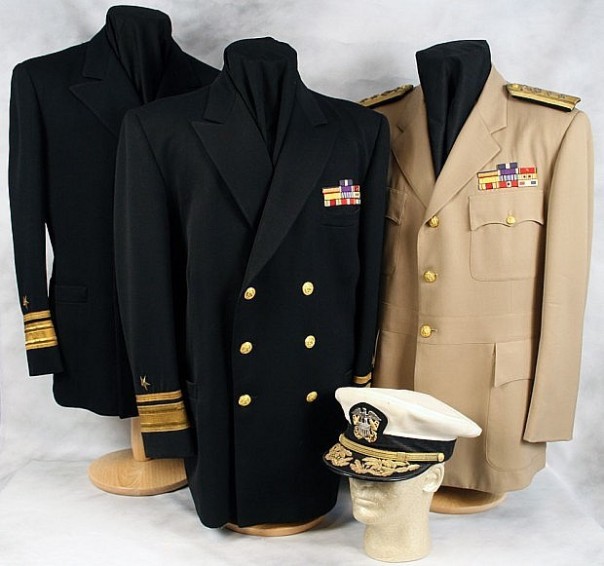 This uniform group belonged to Rear Admiral Robert Copeland who received the Navy Cross for his heroic attack (while in command of the USS Samuel B. Roberts and the destroyers of “Taffy 3″) against a Japanese battleship force in the Battle off Samar (source: D. Schwind).

I’ve been collecting militaria for about three years and nothing that I’ve purchased for my collection is worthy of comparison to some of the impressive acquisitions that I’ve seen other, more seasoned collectors acquire. Some of these people have reached what I would characterize as the pinnacle of militaria groupings that could put most museums’ collections to shame.

I spend a great deal of time touring history- and military-themed museums in my local area. On occasion, a museum might have an item or group related to a recognizable name from our nation’s military history. For me, there is a sense of being close to a significant contributor or a pivotal moment that made a difference in the outcome of the battle or even the war at the sight of a famous veteran’s personal effects. One would expect to see these sorts of artifacts in a museum… but what about a private collection?

In the world of militaria collecting, obtaining a named uniform of a veteran who participated in a significant battle and, perhaps receiving a valor medal for his (or her) service while under fire adds a massive layer of icing for that piece of cake. What if that item was from a well-known historical figure? Audie Murphy? General MacArthur? The chances are extremely remote that a collector would be able to locate a genuine item belonging to one of these people, let alone being able to afford to acquire it.

In the community of United States Militaria collectors (to which I belong), there are several folks who have worked diligently to acquire uniforms and decoration sets that belonged to notable military figures from American history. From general or flag officers to member of the Joint Chiefs of Staff (some holding the position of Chairman, JCS) to Medal of Honor and Navy Cross recipients, these collectors have reached a level that regardless of the time, effort or finances, I could never achieve.

For now, I will simply settle on admiring these collections from afar.