Remembering (and Collecting) the USS Maine!

In the decades following the American Civil War, the United states was busy dealing with the reconstruction of the South, expansion into the Western states and territories, adding new stars to the blue canton of the national ensign (i.e. the addition of states to the Union), the influx of the destitute of Europe seeking to benefit from the Land of Opportunity and all the trefoils of a growing nation. Few Americans set their eyes upon the instability of governments beyond the borders and shores as the nation surpassed her first century of existence. Life, though fraught with the many diverse challenges of the time, was good. 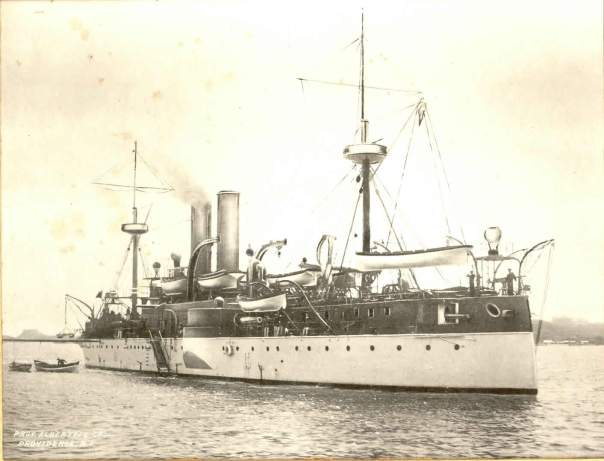 In the latter half of nineteenth century, the American navy commenced a dramatic technological transformation from wooden-hulled sailing sloops and frigates, followed by ironclads and paddle-wheels, to steel coal-fired steam warships. Naval gunnery was advancing and the U.S. leadership was following the advances being made by the British navy that had necessitated a radical departure from the ship design convention (of the time) in order to take full advantage of the new capabilities. The U.S. Navy, had been fully committed to the designs of the ironclad Monitor and many of the European navies adopted similar designs following the American’s success with them during the Civil War. With technology advancing at such a rapid pace and the need for a global naval reach, the Monitor was rendered obsolete, in favor of larger, more powerful ships with greater sailing range which would come to be known as pre-Dreadnoughts.

In the 1880s, the U.S. Navy began planning and designing their first pre-Dreadnought armored cruisers. By 1886, the Navy funded the first two ships of the new design, the lead ship, USS Maine and her (closely-related) sister, the USS Texas. The Maine’s keel was laid down on October 17, 1888 at the Brooklyn Naval Shipyard and wouldn’t be completed for nearly seven years. She was commissioned and placed into service on September 17, 1895 and following sea trials and fitting out, was assigned to the North Atlantic Squadron for service.

As the 1890s were drawing to a close, a spark in the tinderbox of the Cuban independence movement began to be fanned by U.S. financial influence. American capitalism and politics had been involved in Cuba for the past few decades investing heavily in the sugar cane and tobacco industries, driving economic transformation of the Spanish-owned island and fueling unrest among the citizens. American popular sentiment, led by a pro-liberation agenda that was propagandized throughout the newspapers of the day, was growing in favor of intervening against the Spanish government. In January of 1898, a pro-Spanish riot erupted in Havana which prompted the American Consul-General to request assistance to protect U.S. citizens and business interests.

Sailing into Havana Harbor at the end of January, the USS Maine provided a menacing reminder of the United States’ commitment to protect her interests. In addition, her presence could have appeared to the Spanish loyalists as a threat to their sovereignty. Perhaps the revolutionaries saw the ship as an opportunity to draw the United States into a conflict with Spain that could result in the ouster of their oppressive overseers. Regardless of the stance of the two opposing sides, the Maine’s presences added to the already increasing tension.

Aboard ship, the crew was going about settling down for the night on February 15, 1898. Twenty minutes before taps and lights out, the shipboard routines were winding down. Liberty boats had returned to the ship and had been secured for the night. Suddenly and without warning, a massive explosion rocked the forward part of the ship as 5.1 tons of gunpowder ignited. In a matter of seconds, the Maine was sitting on the bottom of the harbor and more than 260 of her crew (of 355 officers and men) were dead.

Galax leaf wreaths decorate the coffins containing the dead of the Maine on December 28, 1899.

Following a formal investigation and inquiry into the cause of the explosion, the cause was determined to be the result of a mine (though no supporting evidence existed). The slogan of the day, “To hell with Spain! Remember the Maine” could be found in print and plastered across buttons and pins as the American public began to rally to the cause. Following the publication of the findings, a media blitz of inflaming editorials and exaggerated facts ultimately led to an April 21, 1898 formal declaration of war against Spain.

America fights back. This button demonstrates the angry sentiments of the day with, “Remember the Maine – Gosh Darn Yer” (source: eBay image).

More subdued, the message is still clear with regards to the Maine’s sinking. Note the crossed American and Cuban flags (source: eBay image).

After resounding victories in Manila Bay (in the Philippines) and San Jaun Hill (Puerto Rico), the Spanish pursued peace with the United States by the middle of July, 1898. The peace treaties were signed in Paris on August 12, 1898, relinquishing all rights and claims to the Philippines, Puerto Rico and Cuba.

With the guns now silent and the U.S. reverting to their isolationist stance, the rallying cry of “Remember the Maine” began to fade from the forefront of the U.S. populace. This was not so with Navy leadership who were still seeking definitive facts surrounding her sinking. In 1910, Navy engineers began constructing a cofferdam surrounding the shallow-water wreck of the ship. After the harbor waters receded from the wreck, investigators poured over every inch of the hulk. With no conclusive evidence uncovered and the bodies of the crewmen were removed for burial in the U.S. (at Arlington National Cemetery), the ship was refloated, towed out to sea and scuttled.

This outstanding example of a USS Maine medallion commemorates the ship and the Pittsburgh, PA memorial that was dedicated in 1914. The inscription on the obverse reads, “U.S.S. Maine, Destroyed in Havana Harbor, Cuba, February 15th, 1898.This medal made from bronze recovered from the Maine.”

The inscription on the medallion’s reverse reads, “Issued by the general committee of the fifteenth annual reunion of the army of the Philippines, Cuba and Porto Rico, in memory of our deceased comrades and the dedication of the Maine Memorial. Pittsburgh, PA | September 16th, 1914.”

This rare pin calls for Americans to avenge the sinking of the Maine (source: eBay image).

This tally (from the BB-10) recently recently sold for under $200 (source: eBay image). 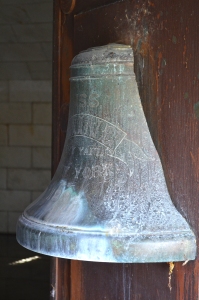 Bell of the USS Maine, broken in half by the 1898 explosion, attached to the door of the memorial at Arlington National Cemetery.

Several pieces of the ship were removed at the time of the 1910-1912 investigation including munitions, guns, pieces of her superstructure and mast and other items that would serve as central components of memorials that were being constructed around the country. Commemorative medallions were cast from metal retrieved from her screws as Americans renewed their commitment to remember the Maine.

Four years following the devastating loss of the cruiser, the U.S. Navy commissioned the USS Maine (BB-10), the lead ship of three-ship class of battleships which also included the USS Missouri (BB-11) and USS Ohio (BB-12). The second USS Maine would proudly carry the name and legacy in Teddy Roosevelt’s Great White Fleet and through World War I. Her 18-year career ended with her May, 1920 decommissioning. The Maine name wouldn’t sail again until 1994 when the Navy launched the 16th Ohio-class Trident submarine, USS Maine (SSBN-741) which is currently homeported in Bangor, Washington.

More than 110 years later, the stricken USS Maine resonates with a minute segment of collectors. While very few items or artifacts originating from the ship surface within the marketplace, memorial pieces are readily available.

“The people of the island of Cuba are and of right ought to be free and independent.” Congressional joint resolution with the United States of America from April 19, 1898.