Sound Timing and Patience Pays Off

I am a sucker for U.S. naval history. There, I said it. I love it all from John Paul Jones and the USS Ranger to the USS Gerald R. Ford (CVN-78), the lead ship in the newest class of aircraft carriers, I can’t get enough. My tendencies and preferences seem to take me to more contextual aspects of naval history – anything to do with the geographical region of my birth holds my interests (unless, of course it is connected to the ships or commands where I served).

I seek out items that can be associated with ships named for geographic locations (city names, place names, etcetera), pieces that can be connected to the local naval installations or anything that originates with local naval figures, such as the Rear Admiral Robert Copeland group in this earlier post. To date, the majority of these items have been vintage photographs…until yesterday.

Prior to her reclassification, the (then) USS Washington (ACR-11) rests at anchor near her future namesake, Seattle, WA (author’s collections).

While searching online, I stumbled across a listing that contained a piece of history that made my jaw drop. To see the price was so much lower than it should have been made me giddier than a kid on Christmas morning. I placed my watch on the item and planned observe it for a few days to see if any bids were placed. A few days later, with no one bidding (that I knew of) I configured my bid snipe and hoped that all would work out. 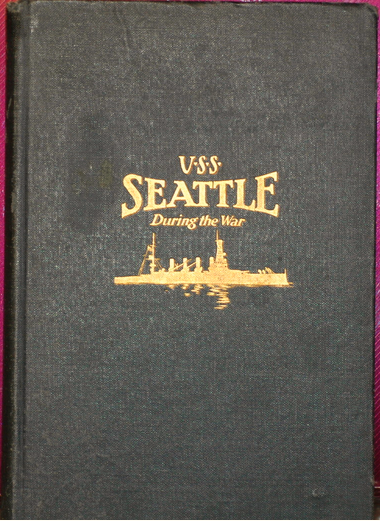 Judging from the auction listing photo, the cover of my new vintage cruise book is in nearly pristine condition (source: eBay image).

Around the time of the auction close, I was out and about when I received an email that my sniped bid was the winner and that no other parties had bid against me, leaving the closing price the minimum amount. The item, a World War I cruise book from the USS Seattle (an armored cruiser of the Tennessee class) that was placed into commission in 1906, documents the ship’s WWI service during the war, serving as a convoy escort as she provided merchant vessels protection from German U-boats during trans-Atlantic crossings to the United Kingdom.

The inside end papers is inscribed with what appears to be the previous owner’s name – who was a coxswain aboard the ship. I will be researching the sailor’s name to see what I can learn about him (source: eBay image).

Inside the pages of the book, this photo shows the USS Seattle in her “dazzle” camouflage paint scheme (source: eBay image).

As cruise books were produced in small numbers (for the crew), they are quite rare typically driving the prices close to, and sometimes surpassing, $500. Like most vintage books, condition is a contributing factor in the value. My USS Seattle book was available at a fraction of these prices making it affordable when it would normally have been well out of my budget.

Good things come to those who wait…and who check at the right time. For me, the waiting continued right up until the time that I tore into the package moments after it was delivered by the letter carrier (yes, I can behave as a child, still).