You Have the Right to…Collect Armed Forces LEO Militaria

This current-issue NCIS badge is mounted to a leather holder (source: US Navy).

Militaria collecting has a broad spectrum possessing many facets that allow people to specialize or focus their efforts on specific themes or concepts. Aside from settling on a particular branch or time period, collectors might choose to get very narrow with their collections. Some of these focus areas might even cross over into other collecting genres. One category or focus area that has grabbed the attention of collectors beyond the bounds of militaria is law enforcement within the ranks of the armed forces.

When considering military law enforcement, one might immediately begin to think of the Naval Criminal Investigative Service (or NCIS) that has been popularized by the  television drama franchise on CBS. The Army has their own similar organization, United States Army Criminal Investigation Command (CID). However, the law enforcement community within the armed forces is significantly more broad, which means that collectors have many options and avenues to pursue.

A nice example of a US Army MIS Badge (image source: U.S. Army)

Aside from the civilian-staffed agencies such as the NCIS and CID, there are plenty of uniformed active duty departments and billets that are filled by military personnel. In addition, there are duty-based positions that are performed as an extra responsibility outside the daily duties of the service members’ normal MOS, specialty or job assignment. Regardless of the specific role, there are opportunities for collectors to obtain law enforcement militaria.

In existence since the Revolutionary War, the U.S. Army’s Military Police Corps was not officially organized until September of 1941, when it was formally established. The U.S. Navy’s version of the MP, the Master-at-Arms, has been in place since the nineteenth century, predominantly serving aboard ship in the early days.

One of the more diverse categories of objects available for collectors is in the area of brassards, or arm bands. Within the Air Force Security Police (SP) and Army, this area could present collectors with limitless varieties from countless military police commands. Within the Navy and Marine Corps, there are a fair amount of Shore Patrol (SP) brassard versions—easily confused with the Air Force versions—dating back to well before the second world war. 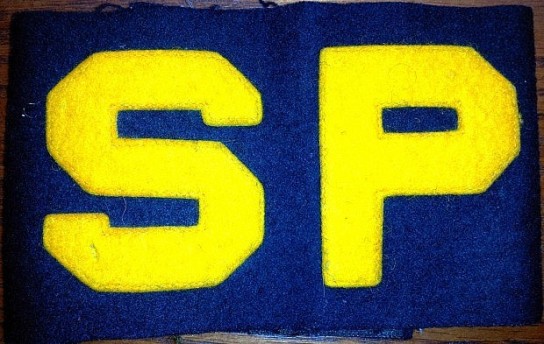 This Shore Patrol brassard is a 1980s vintage. Modern SP arm bands lacking the Velcro attachments can be difficult to discern from examples from the WWII-era.

A Master-at-arms badge, dating to the 1970s, was used aboard the aircraft carrier, USS Lexington when she was designated a training carrier.

Along with arm bands, collectors could launch into military law enforcement collecting by pursuing badges. Keep in mind that there could be laws that prohibit owning current versions of these law enforcement badges. Possessing a currently-issued badge could result in considerable legal trouble so be sure to understand what is permissible in your area prior to acquiring the badge. Typically, obsolete badges should be allowable, but I would encourage collectors to remain familiar with their local laws.

Besides brassards and badges, collectors could pursue helmets, uniforms, utility/web belts (and all the attachments) and weapons, such as side arms and batons.  The trick is to find your niche and stay within your budget.